State of the Bible Software Market 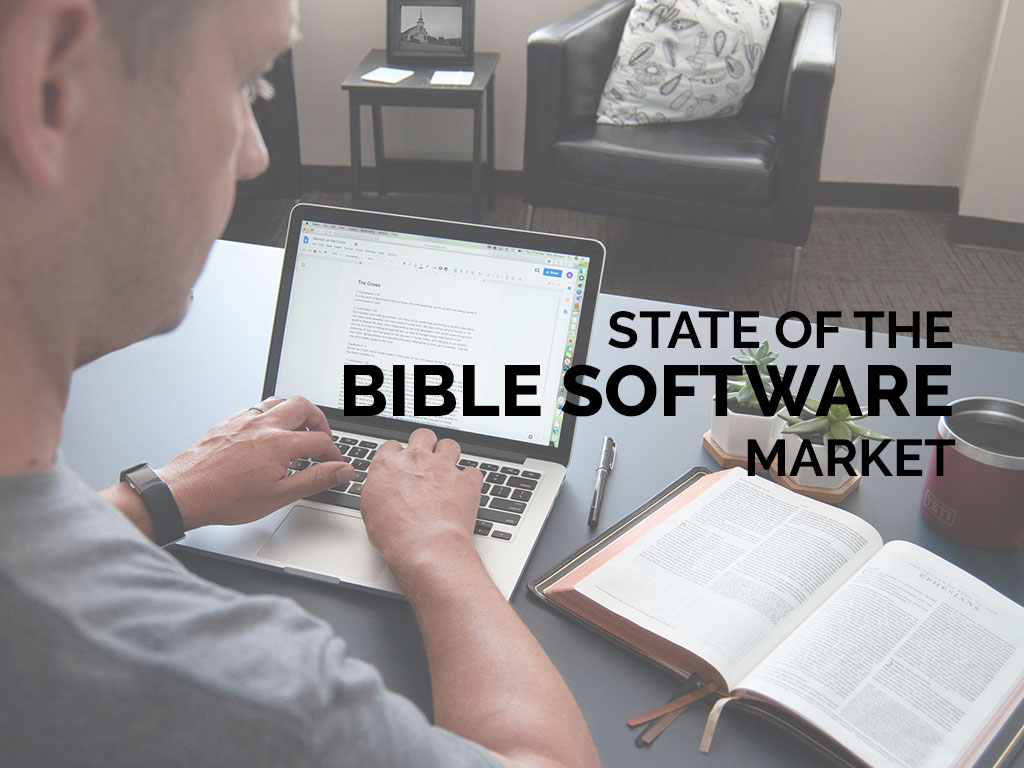 Changes in the Bible Software Market

Many Bible software companies have changed hands in 2020:

Like most software markets, as the Bible software market matured, it became harder for the smaller companies to compete. They struggled and were swallowed up by the larger and more successful companies. That’s disappointing because I think we get better software with more competition. However, on the bright side, we used to buy books in one format and then you were stuck with your books in the format you first bought them in and it was harder to move. Now, there’s a smaller number of formats and fewer silos to get stuck in,” says veteran Bible study software reviewer for CTT and pastor, Kevin Purcell.

This fall, Faithlife announced the acquisition of Wordsearch, which was owned by LifeWay. Wordsearch customers will receive Logos-compatible editions of most of the titles they own in their Wordsearch library. They will also receive a comparable version of Logos, at no charge. Additionally, Logos users will be able to purchase thousands of new Logos-compatible resources from the B&H catalog. They’ll find Bibles, academic commentaries, Spanish resources, and content from influential faith leaders including Charles Spurgeon, Beth Moore, Tony Evans, John Piper, Jackie Hill Perry, Timothy Keller, and Rick Warren, to name a few within the catalog.

How Changes in Seminaries Impacted the Bible Software Market

We’ve seen growth in the seminary market before and during COVID-19. With seminaries shifting to 100% online, many opted to recommend or even require Logos Bible software. Instead of allowing students to purchase resources from different locations, we’ve seen them adopt our software as a way to unify students’ study materials,” says Bob Pritchett, CEO of Faithlife, maker of Logos.

The other significant players in the Bible study library software market include Accordance, Olive Tree, Laridian, and E-Sword. Requiring the most investment yet having the most robust tools, Logos stands out amongst the pack.

Accordance is the next largest player in the Bible study market with major new version releases every two to three years. They released Accordance 13 for macOS and Windows in late 2019.

We have some major updates coming for our mobile software on iOS/iPadOS and Android later this year or early next year. Very soon, we will complete a major website conversion which will make ordering and account maintenance much more user friendly. After that, there’s a fifth platform for our software we are considering,” comments Rick Mansfield with Accordance Bible Software.

While the number of Bible software companies decreases, the market of current and potential Bible software users is increasing. As of December 2019, YouVersion reported over 400 million downloads of its free ever-popular Bible app. Companies that serve the higher end of seminary students and pastors have grown smaller through acquisitions. There is no shortage of Bible apps on the market, some with great study tools.

He continues, “This same decade has seen new Bible software companies emerge who are embracing these new hardware/platform changes. So, in the decade which saw WORDsearch first sold to LifeWay, and now to Faithlife, we have seen the rise of YouVersion. One generation of programmers hands off the baton to the next generation of programmers; meanwhile, God’s Word remains as popular as ever.”

Other app providers such as BibleGateway have undergone significant updates in recent months. BibleHub is also a great website that has a valuable app for light study.

With the acquisition of WordSearch by Logos, the number of different companies offering Bible software solutions for this growing number of users has decreased by one. But in the meantime, it is easier than it ever has been to develop and distribute new apps. While the big players from 25 years ago may be gone or consolidated, dozens of others are coming up to meet the needs of a new generation of Bible software users. Christians today have more and better choices of Bible apps than they ever have,” comments Craig Rairdin, founder and president of Laridian, Inc.

He adds, “I believe that Logos and WordSearch target different types of users. There may be a large number of WordSearch users looking for alternatives in the next year. They’ll have plenty to choose from.”

At the end of the day, the Bible study software market is here to stay.

Check out these additional resources related to Bible study software:

https://youtu.be/HBpFbzJlkq8 FrontDoor is an online solution to help you quickly connect with people in your community that visit your website. The service offers a content library, a...
Websites

Free eBook Resource: Prayers for Knowing God by Tony Evans “As you get to know God through relational communication with Him, may He reveal Himself more...