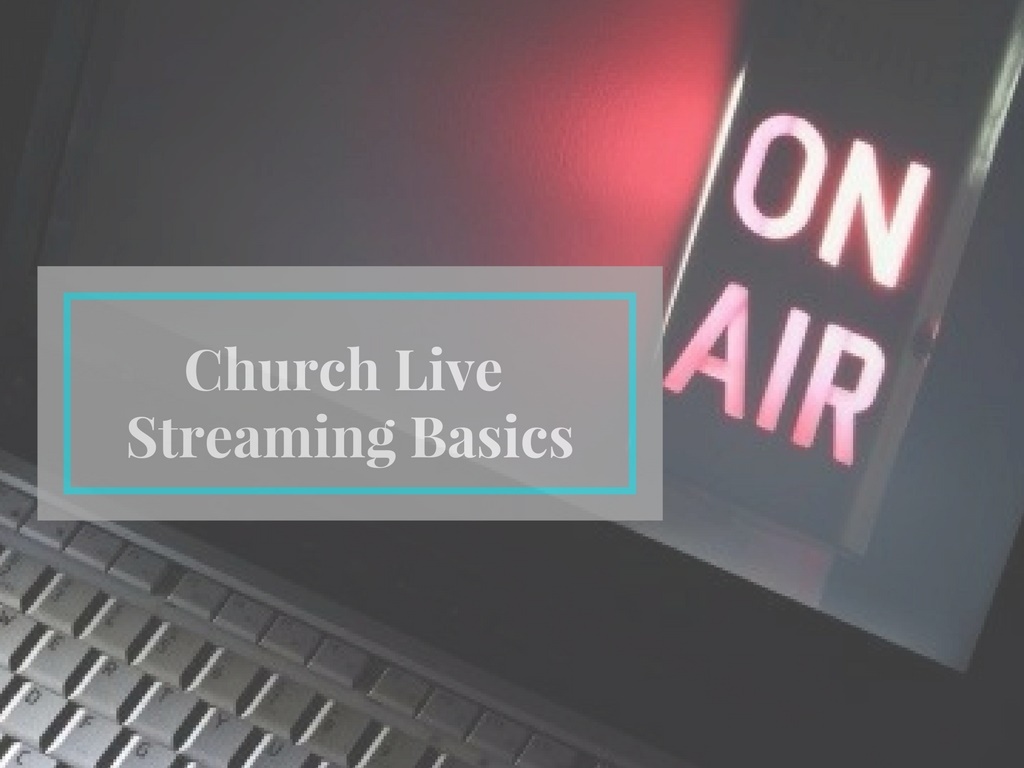 Live streaming is one of those areas where people want to do it, but don’t quite know where to begin. It wasn’t all that long ago that I was in the same boat, but now that I stream live church tech training 5 days a week, I’m starting to get a handle on it.

Last time on ChurchTechToday, I talked about streaming for almost nothing, but one of the commenters asked for a more concrete description of the bare minimum set up that I recommend.

You should know that I’m not doing this for a large church, although I do go to one. That’s not the area I serve in. I do live video production there, but for my own ministry, I’m the “chief cook and bottle washer” so I have to have my hands in everything or it doesn’t get done.

My studio, while a dedicated space, is the smallest bedroom in our house. So, while what I’m talking about might work for a pastor’s office, I’m not streaming from a 1,200 seat sanctuary (or even a 50-seat one). You’ll need to scale up these recommendations according to the venue, but the purpose of this post is really just to give you the bare minimum so that you can swap out accordingly.

There are four main elements that you should consider when you want to stream. You need good audio, lighting, video, and encoding/connectivity.

Unless you’re doing a stream for the deaf (which isn’t a bad idea by the way), the sound is really the most important factor to consider. This means that you don’t ever use the computer’s built-in microphone. I don’t care if you think you get decent results, this isn’t an expensive area to improve radically.

The reason is pretty simple. I had all these things already and I wanted the same setup whether I’m sitting at my desk or recording against my White Background. This isn’t ideal, but it works.

The Zoom H4n isn’t really doing anything that a decent mic preamp couldn’t do, but I didn’t have a preamp, so I improvised.

There are better audio input devices than the iMic, but again, I had it, and it bypasses the onboard sound card, so there’s no hum from the power supply of my Apple MacBook Pro.

If I was starting from scratch and primarily doing my streaming from the desk, I’d use an Audio-Technica ATR2500x USB/XLR microphone. This unit includes the ability to plug directly into a computer’s USB port, eliminating the preamp input devices I have, and most of the podcast consultants I follow swear by it.

For lighting, I use a three-point lighting set-up, but because I’m in a house without an additional chiller for this room alone, I don’t use my professional light kit. Instead, I use incandescent-balanced compact fluorescent bulbs.

Why incandescent color temperature? So that I can add in professional lights when I want without having to compensate for the change in color.

My key light is a NEEWER brand Softbox that I bought off of Amazon for around $16. It’s meant for a flash, but I modified it to take up to four (but I’m only using two, right now), 100-watt equivalent compact fluorescent bulbs.

My backlight is one of those “salad bowl” Clamp Lights that you buy at the hardware store with a Light Bulb “y” adapter that allows me to use another two of those CFL bulbs.

My fill is supplied by silver windshield reflector.

If you have overhead lights that point straight down, you could have a problem where the shadow of the subject’s forehead darkens his eyes making him look like a raccoon. Without a backlight to provide separation, a dark suit coat will blend into a dark background. Good lighting is one of the most overlooked aspects of video production in the church world, so set yourself apart by doing the best you can with what you can get.

Unless you have dedicated circuits and additional on-stage cooling, consider looking into LED lights for a stage (although the lighting guy I talked to, said you should still go with tungsten if you wanted a true white color). They’re more expensive to buy, but the energy savings, and not having to change lamps will pay for that difference, and your pastor will thank you for not making the podium the hottest place in the whole building.

For cameras, make sure you can get your signal into your computer or it’s useless. I have a DSLR that takes great video and I cut together with shots from it for a couple of my shows when I want really high quality, but I can’t do it live because I can only get the video out with HDMI or composite and I’d need an adapter to use either.

For a while I suffered with a cheap webcam that had no control, so merely moving my head would sometimes cause the light to change enough that the camera would attempt to compensate by quickly making the shot suddenly, noticeably brighter, or darker. Yuck!

I’ve recently found a solution, though. I bought the Webcam Settings app in the Apple app store and combined it with a Logitech C615 Webcam. While the DSLR still looks better, I have more control now and can even shoot high-key (white background) stuff live.

I could imagine smaller streaming shoots like seminars with a couple of these cameras on tripods, running into switching software, like WireCast (mentioned below).

Your church will probably want to do better, but the quality of these webcams is better than what we used in local television just a decade ago. The lenses and level of control aren’t, but with some careful planning (and good lighting), you can get a really nice picture.

A budget option might be a couple of used Canon GL-2s. They’re not HD, so I normally don’t recommend that you go that route. Since they’re DV cameras, they can send video via firewire, so a computer with a firewire port wouldn’t need an additional capture device.

A better option is to use a Blackmagic Design Mini Recorder connected to an HD SDI or HDMI switcher like the Blackmagic ATEM Television Studio Switcher with signals coming from HD cameras. That’s the way I’d go if my computer had a thunderbolt port.

I connect the iMic and the Logitech cam to my MacBook Pro, on a wired 1 Mbps upstream connection, but I’d prefer a better connection.

I’m able to get by with so little because my stream isn’t actually HD. It’s 640×360. A lot of people assume that a wide aspect ratio video is HD, so that’s a place you can actually get by (at least for now) with less than you might have thought.

Just starting out, most churches should at least try Adobe Flash Media Live Encoder (FMLE). It’s limited but free, so using it in initial tests should show you if you need something more robust. If you want to stream to multiple sites at once, switch in-software, or do something like that, WireCast by Telestream is the option I use.

While you don’t need a $5,000 computer to encode, you do need a fairly recent machine. I wouldn’t use a donated Windows 98 or PowerPC-based Mac to do the job. My MacBook Pro is a 2.4 GHz Intel Core 2 Duo and sometimes encoding, recording, and monitoring the chat room taxes it pretty heavily, so I wouldn’t use anything less than that.

What most people don’t know is that you don’t stream to each person watching your service individually. You use a streaming provider to handle the distribution. There are free options like YouTube, which recently opened up live streaming to any verified account in good standing or paid services like the one I use, ChurchStreaming.tv, or WorshipChannels.com (which I’ve also used), StreamingChurch.tv, Sermoncast.com, and others.

As with anything, paid services tend to offer advantages in workflow and flexibility that free ones don’t, so unless you can’t afford any bill at all, don’t automatically ignore the paid services. Scheduling, embedding, video podcasting, iOS streaming, and a Roku app (which by the way doubled my viewers when it was approved) are all reasons that I use ChurchStreaming.tv instead of YouTube. By uploading the finished show to YouTube, I get the best of both worlds, getting traffic from them as well, although if I had better bandwidth, I might stream to YouTube, too (as a backup and to get on the shortlist of live streaming videos).

I’d recommend against using ad-supported services (other than YouTube) because I’ve heard of them interrupting the stream with ads that, at best, have nothing to do with your content and, at worst, aren’t something you want to support.

Obviously, you’d need more lights in a larger room. You’ll need to connect the streaming computer to your video switcher with a capture card of some sort if you have a switcher in your signal chain. Audio for a live worship-set will be much more complex than audio from one person talking as well. If you don’t have written permission for all the songs you use, you’ll need a license to stream legally, like the Worshipcast license as well (and even that might not prevent YouTube from preventing you from streaming because of fears that you’re doing so without permission), so there are other incidentals, but I just wanted to write about what a small ministry in a small facility could do because it’s more than you could ever do before.

What questions do you have about live-streaming? What would you add?