When was the last time you carried your check book with you or enough cash to make a substantial tithe on Sunday morning at your church? Well, that’s exactly what RidgePoint Church in Winter Haven, Florida realized as they worked to serve their member base of 800.

When the church’s leadership began to probe its congregation, they found that lower giving stemmed from a lack of in-pocket cash. As one member pointed out:

I don’t carry cash, and I don’t even know where my checkbook is.”

With an average member age of 29, providing a technology-based giving alternative seemed the logical next best step in engaging members to donate on a regular basis.

But, although RidgePoint  established an online donation portal in 2005, use of the portal was limited, with just 33 percent of members making use of the platform on a regular basis by the end of 2011.

In 2012, then Lead Pastor Timm Collins began a conversation with his team around how they could encourage members to embrace online giving. The team recognized that one of the challenges to date continued to be a lack of education and promotion around the online portal.

Already working with digital giving solutions provider Qgiv for their existing portal, Collins and his team decided to again engage Qgiv to bring the company’s digital giving kiosk to RidgePoint’s members while maintaining the online portal—keeping all solutions under one platform.

Donors want to give in any context – whether mobile, online or in person,” said Todd Baylis, president and founder of Qgiv. “This is especially true in campaigns for disaster and emergency-related causes. The Qgiv Contextual Giving Platform removes impediments to successful fundraising campaigns by empowering organizations to accept donations in any form or context.” 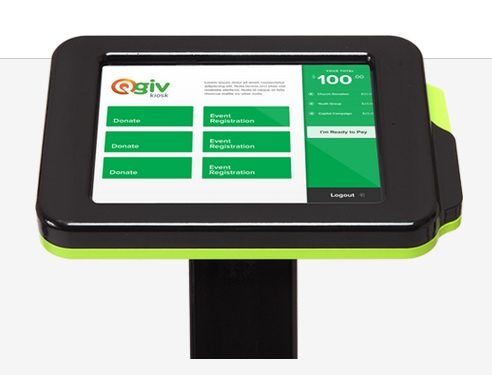 Qgiv’s comprehensive giving platform combines online donation properties with mobile and in-person digital kiosks, enabling churches to reach their parishioners and external donor base at any time, in any context to help to increase the consistency, volume and amount of donations.

The Qgiv Kiosk combines online donation properties with the latest advancements in tablet technology, while its branded online portal enables donors to automate their gifting schedules, and receive detailed receipts for each donation via email.

The church’s pastors note that traditional giving methods statistically have about a five minute window. But, in today’s tech-savvy generation, that period has shrunk to seconds before the donor walks away. They say that being able to swipe a credit card or to quickly set up a secure online account with reoccurring donations has made all the difference for the church’s members and the consistency of the donations the church receives.

As the number of members using Qgiv’s digital platform options for their gifts continues to increase, RidgePoint is looking to the future, working with Qgiv to pilot the company’s latest Text Giving option to enable donations via mobile device, making it even easier for members to make their gifts to the church from anywhere, at any time.

What online and/or mobile giving solution does your church use?