You’ve heard of “preaching to the choir,” right? If you haven’t, it’s an idiom that means telling people something that they already agree with or should.

Too often, churches make this and similar mistakes when getting their message out. We either “preach to the choir” or exclude people with our choice of vocabulary.

There are two problems to come to terms with:

1) The Problem of Clarity

When you’re podcasting, this can be a huge problem. The advantage of new media — the dissolution of borders, is also the problem.

When you put your church service on the local Christian radio station you have an idea of who was listening. On the internet? Not so much.

When I was in college, I deejayed on our college radio station. My roommate did a show that was mostly album rock and pop. Another friend read “bedtime stories.” I did a show called “Heavy Righteous Metal” which was Christian hard rock.

The audience never knew what they were going to get from one moment to the next. You might hear secular music one hour and then something very Christian the next.

One night as I did my show, I got a call from a listener with a request. “Hey dude, can you play me some AC/DC?” I told him that I didn’t have any and the conversation ended. I was confused, though. My show was “Heavy RIGHTEOUS Metal” after all. The problem was that I wasn’t clear and the station wasn’t clear about what it should be. I thought the title was clear, but it wasn’t. An occasional weekly show on one subject, didn’t cement it into the mind of the listeners used to hearing about another.

2) The Problem with Descriptions

Now, look at iTunes. “Religion & Spirituality” doesn’t quite narrow down who your podcast is targeted to. Sure, there are sub-categories, but Christianity is still a broad subject. Anyone from the nominal Christian, to Roman Catholics, to Pentecostals might fit in that group.

How does a listener know who to listen to? Titles and descriptions help, but calling your podcast “First Church Hackensack Weekly Messages” doesn’t.

So, what should you do? Here are six solutions: 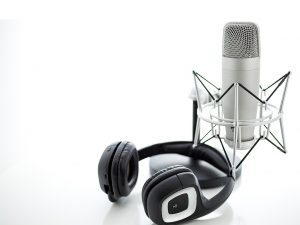 1) Get Clear on Your Target

Start by getting clear on your target. Who, exactly, are you trying to reach with this podcast? Don’t say, “everybody.”

A radio station that tries to reach everyone by playing “Jesu, Joy of Man’s Desiring” by J. S. Bach followed by a song by Judas Priest and then a song by Prince, will reach no one. While churches shouldn’t exclude people, tailoring who you try and reach will help you reach those people AND others who are somewhat interested.

So, who does your podcast try an reach? Kids? Parents? Singles? Young marrieds? Define who you’re trying to reach.

Now, create an “avatar.” This is a business term for your ideal customer. For your church, you might define the avatar that you’re trying to reach more specifically than just “parents.” Are you talking about single parents or married parents? Moms or dads? New parents or parents of teens? Each of those is different, so you really need to narrow in on it.

3) Get to Know Your Avatar

So, let’s say we’re reaching out to divorced mothers of teens. Start studying women who fit this profile. Get to know some and find out their needs, desires, pain points, etc. Start asking questions and listening. You want to get to the point where you know the struggles each of these moms face and can develop solutions, teachings, etc. for them.

4) Speak to Your Avatar

Different people may speak the same core language, but use different words to do it. Talking to you, I can use technical terms that I’d explain to my 80 year old mother. Talking to her, I might reference family vacations or inside jokes that I’d have to explain to you.

5) Don’t Cave to Pressure to Widen the Net

I was listening to a podcast that wasn’t geared to me, but to single men. A women emailed the host and said that he should stop addressing the “guys” because a lot of information was applicable to everyone. To his credit, the host didn’t rebrand the show. He didn’t say, “I’m going to quit talking to just guys because she’s right.” He thanked her for listening. Told her that she should feel free to keep listening and also said that it’s a podcast targeted toward men.

Beth Moore does women’s Bible studies. When I first got married my wife and I went through her “Breaking Free” Bible study today. Throughout the study, she’d say things like, “Ladies, I know what you’re thinking” or “Are you with me ladies, when I say I hope there’s no chicken breast in Heaven?”

My pastor, at the time, was also in the group. He mentioned that the study was great for everyone, but that Beth should just embrace her role as a pastor for all. There may be theological reasons she targets women, but from the stand point of knowing who she can best appeal to, I think it’s brilliant.

Each audience has different needs and experiences. When you talk directly to them in a way that identifies them, it makes them feel like they’re part of a group or club. This fosters a sense of community that will bring them closer to each other and to you.

So, should you podcast a sermon, geared to all adults? Yes. Should you have a podcast for single mothers of teens? Yes. Should you have one for retirees? Yes. Whatever God is calling you to, do that. Just realize what audience you’re speaking to and speak to them. Preaching to the choir is fine, if you know that’s what you’re doing. The problem comes when you act like you’re“preaching to the choir,” but you’re actually talking to people who don’t understand what you’re saying. Don’t do that.

For more practical tips on using podcasting in your ministry pick up my Podcasting Church book through Amazon.