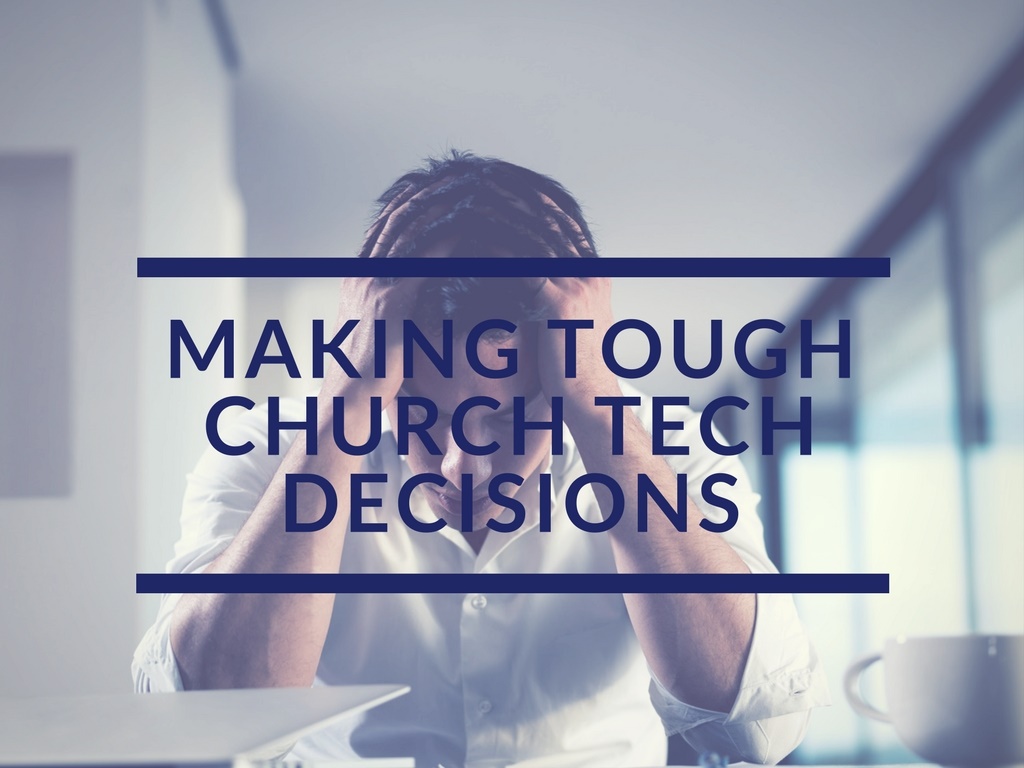 Stewarding church funds well is no simple task. Chairs and communion cups are straightforward purchases, but there is no easy strategy for making technology decisions. By watching those who have gone before and seeking wisdom in planning, spending, and utilizing technology to glorify God, churches can avoid pitfalls and make the right purchases for their ministries.

There’s no way to tiptoe around it—churches with money to spend often have unrealistic expectations. James Wasem, consultant and author of Great Church Sound, comes across this often in his work with churches.

A church I was working with expressed to me that they just had to have a video wall—a screen wall made up of multiple flat screen TVs. They saw this at another church, and they thought it was the perfect thing,” says Wasem. “Although I like video walls, it wasn’t the right solution for this particular sanctuary.”

The church’s budget only allowed a 2×2 (four flat-panel monitors) video wall. This configuration wasn’t ideal because it featured crosshairs in the very middle of the wall display where the thin screen bezels met.

It didn’t matter how hard Wasem tried or how many alternatives he presented, the technology committee was sold on the video wall concept. The final installation was beautiful, and it worked flawlessly. However, after nine months of crosshairs obscuring the imagery on the video wall, something had to be done.

Guess what?” says Wasem. “In less than one year, I was asked to go back and take down the video wall and install a single 90-inch, consumer-grade TV. The tech committee was clapping in celebration as the video wall came down.”

Even after selling the used video wall to another facility, the sum total project cost came in around $17,000. That’s a $12,000 premium for the ‘cool factor.’”

Even if you have the money to spend, it’s vital to do your due diligence before you invest in new church technology.

That’s what being a good steward is all about,” says Wasem.

Plan for the Future

For Dan Chrystal, who has served as executive pastor for churches of all sizes, setting up the church for future success was always the priority.

In smaller churches, we tried to make purchases to set us up for years to come. As the saying goes, ‘You can get a cleaning, or you can get the cavity fixed.’” says Chrystal, who is currently on staff at Bayside Church and Thriving Church International in Roseville, California.

In larger churches, tech decisions were based more on needs. For example, at one church I worked at, we needed a new soundboard for Christmas since we served 6,500 people among all of our Christmas services. Before we purchased, however, we looked at the shelf life for the equipment as well as capacity. We set ourselves up for the future in order to grow,” says Chrystal.

While some churches have the funds available for a large technology purchase, many churches do not.

With the soundboard, we looked at financing and leasing options. Most churches don’t have funds sitting around for these kinds of purchases. In the end, we decided we didn’t want to keep paying for the tech instead of owning it,” says Chrystal. “For computer situations, we would go to companies who were getting rid of computers, and they would donate them to us.”

When we had a major purchase to make, we would seek out other churches and ask them about their experiences. We would ask them about the positives, the negatives, and the things they wished they hadn’t purchased. In one case, we actually sent someone on our staff to meet with the church prior to purchasing,” says Chrystal.

Wasem adds, “My recommendation is to engage people who work with the technology you need every day. Things change very fast in the world of church tech and live production equipment.”

Focus on Needs, Not Wants

Savage often starts by looking to see if there is an off-the-shelf technology solution. Next, he researches whether the church can implement the technology in-house or if it requires outside expertise.

He then asks, “What will be the useful life of the purchase, and how does that compare to the time horizon of the need? Is the cost of the purchase commensurate with the need being addressed? Does this purchase make sense to pursue as a one-off, or does it make more sense to address it as part of a larger project?”

Savage’s church recently purchased and implemented a live-streaming system for their worship services.

At the beginning of 2016, we were faced with several simultaneous challenges, and the live streaming system turned out to be the answer,” says Savage.

First, the staff member who had managed the duplication of DVDs for our media ministry had transitioned out. We stopped duplicating DVDs for a while, but we would often hear from congregants that they missed seeing the video of the service.

Second, our media archive was all offline—boxes and boxes of DVDs, CDs, tapes, and other antiquated media—and it was growing at an alarming pace.

Third, our existing video recording system was nearing 15 years old, completely analog and well past the end of its useful life.”

Their solution was to purchase live production software, Livestream Studio, which allowed the church to turn a standard Windows computer into a complete video switching, streaming, and archiving system.

The church also purchased a new HD camera and now streams every service directly to YouTube.

Streaming straight to YouTube allows congregants to stay connected while they are away and also creates a searchable digital archive. This solved multiple challenges while also opening up a whole new avenue for ministry,” says Savage.

Former worship pastor and church communication director turned consultant, Ryan Holck of RAD-Ideas.com says, “After 17 years of church experience, I can tell you the church’s emphasis on stewardship often works against its finding the ‘right’ solution.”

He often sees churches make decisions based on upfront costs without considering the cost to upkeep, maintain, and run the technology long term.

Spending a little more now may save churches hundreds or thousands of dollars in staff hours, volunteer implementation, and replacement of inferior products.”

Holck sees this scenario play out over and over again when churches select lighting.

Just because you found lights for a third of the cost doesn’t mean they will last. Our youth department wasted so much money buying things we advised against. Then they wondered why their lights weren’t bright enough or flickered so much they couldn’t be used.”

He also sees the issue of media computers come up frequently in online support groups.

Techs often ask, ‘What is the lowest-level computer I need to make this work.’ With this mindset, they will be replacing a computer in one or two years instead of four to five years, even though the higher-end computer would have cost only 10 to 20 percent more,” Holck says.

There is an easy temptation, particularly in churches, to value engineer technology purchases in a way that is detrimental to ministry. For example, when our current youth space was constructed, the house lighting was controlled by a massive bank of dimmer switches. Unfortunately, the dimmer switches were undersized for the lighting loads, and they would regularly overheat and fail. Entire banks of lights would be unusable for months at a time until the electrician could replace the failed dimmer.

Over the course of five years, the full set of switches was replaced four times, at significant cost. Finally I said, “Enough is enough,” and had a proper architectural dimming system retrofitted. This was by no means the least expensive solution, but reliable lighting was far more important for the ministry that needed to happen in that room.”

Making technology decisions without enough information or advice from other churches and professionals can come at a heavy cost. By stepping back, evaluating needs, and setting aside desires that aren’t best for your church, you can make level-headed, God-directed decisions that will maximize the investment in both the technology required and the ministry it is meant to serve.

Where Can I Go for Tech Help?

Churches are often left to their own devices to figure out how to make good technology purchases. Few church-specific options are available, but churches can also turn to regional screen and audio equipment installers or theater sound installation/consulting groups. Most importantly, churches should talk, talk, talk to other churches to learn what they are using and how they arrived at that decision. Finally, here are a few online resources that can help:

[This article originally appeared on Christianity Today Pastors and is has been used with the author’s permission.]