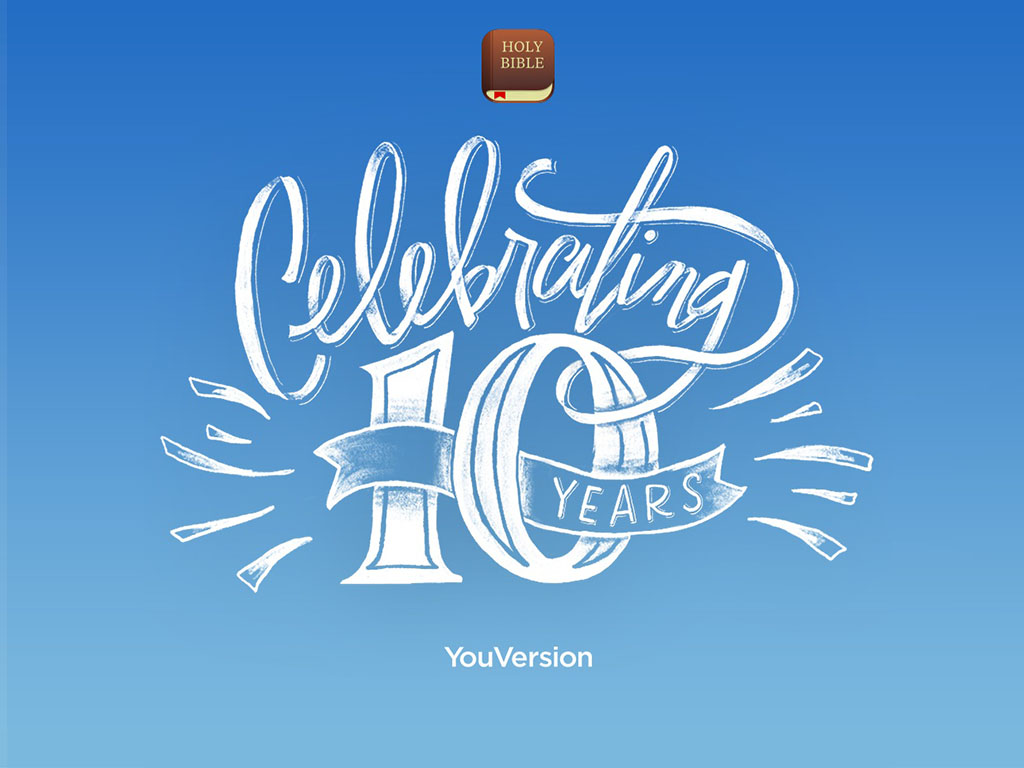 It’s hard to believe that YouVersion is celebrating its 10th anniversary, yet at the same time, most of us can’t imagine life before this revolutionary Bible app. Whether connecting with scripture through audio in the car, doing a Bible study with your kids, or sharing your Sunday service bulletin, the YouVersion Bible app has certainly changed the world for the better.

This July, YouVersion celebrates the 10-year anniversary of the Bible App, which was one of the first 200 free apps available when Apple launched the App Store on July 10, 2008. In the decade since the Bible App has been downloaded on more than 330 million devices and in every country of the world.

We never could have predicted the results we’ve seen as millions of people around the world have read, listened to, shared, and interacted with the Bible and each other in new ways,” said Bobby Gruenewald, Life.Church Pastor, Innovation Leader and YouVersion Founder. 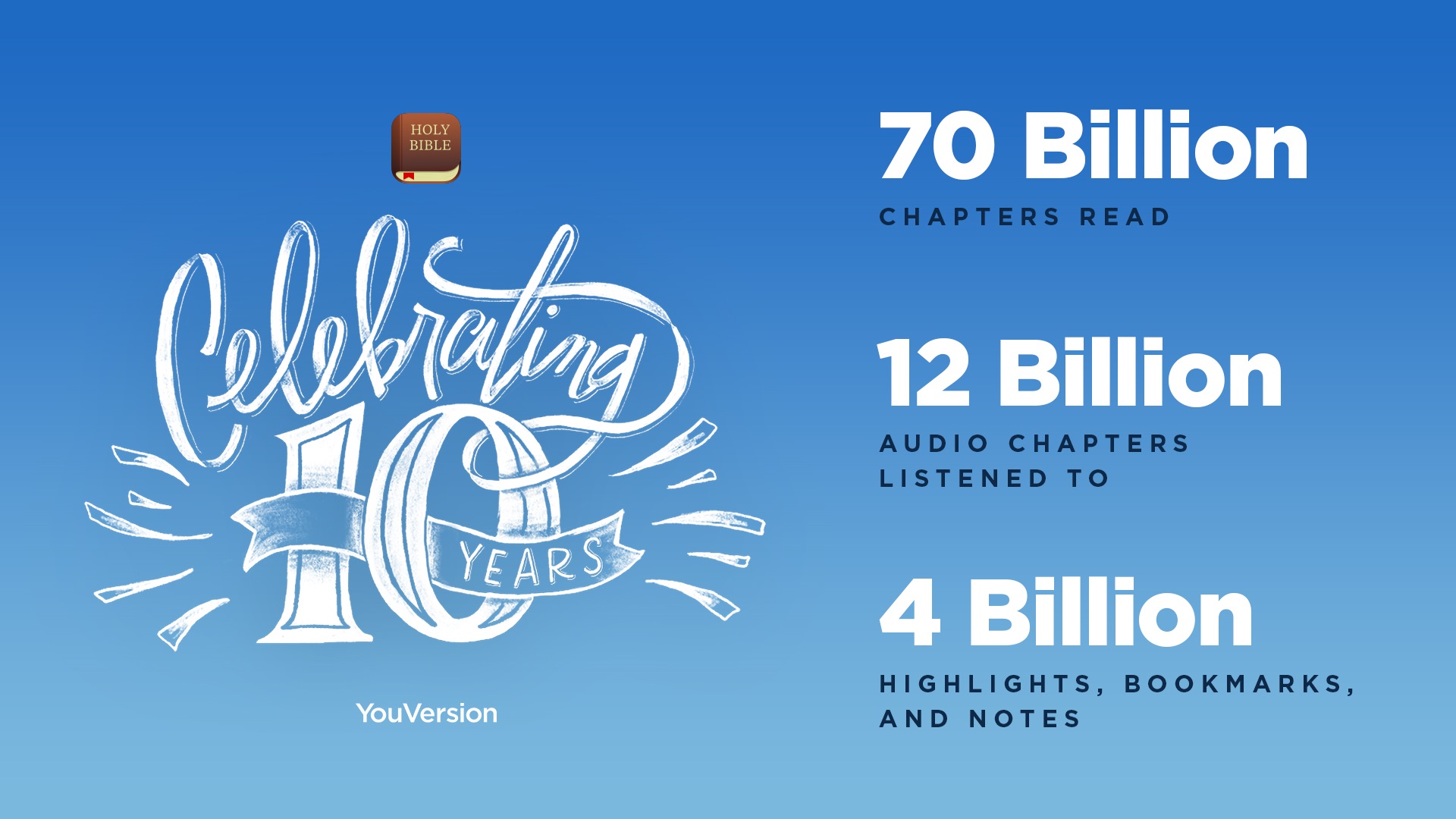 Early on, we discovered that proximity helped us engage with the Bible,” said Gruenewald. “As soon as I had access to the Bible on the phone that’s always in my pocket, my connection to it naturally became more frequent.”

With smartphones propelling social media platforms to new heights, the YouVersion community quickly adopted social sharing features as they were added to the app. Over the last decade, Bible App users have shared more than 950 million Bible verses, earning the Bible a prominent place in people’s lives and social media feeds.

Recognizing the opportunity to bring more relational interaction around the Bible, YouVersion introduced community features such as a home feed of friends’ activity and the ability to study the Bible together. Through Plans with Friends, people can connect and discuss the Bible when they aren’t in the same room, or even the same country. This feature helped change the life of a New Jersey native, Adora, who used the Bible App to rebuild a relationship with her mother.

When I started using the Bible App, I hadn’t seen or spoken to my mother in 10 years,” said Adora. “After several months of reading Bible Plans about forgiveness and healing, I decided to offer my mom a relationship with me—but only in the Bible App.”

Adora added her mother as a Friend in the Bible App and sent an invitation to do a Bible Plan together using the Plans with Friends feature. As they talked about what they were reading, they opened up about mutual feelings of hurt and anger. They slowly went from only talking in the Bible App, to texting, and then meeting in person to pray.

I never, ever thought that I would have a relationship with my mom again,” said Adora. “But by reading the Bible and doing these daily plans, God has worked a miracle on my heart and in my life.”

Beyond shaping the way we interact with Scripture and each other, the Bible App has introduced a way for the Bible to reach us in our everyday lives. Features like Verse of the Day notifications, reading reminders, and daily Streaks have helped people develop new Bible-reading habits, sometimes after years of trying to do so on their own.

When people install the Bible App, it’s usually because they want to read it more. So we’ve spent a lot of time thinking about how to help them do what they want to do,” said Gruenewald.

Each new feature is targeted to increase daily engagement from the YouVersion community. Since adding features like daily Streaks and Perfect Weeks, the number of daily active users has increased by more than 30 percent compared to last year.

These last 10 years have been more than we could ask, think, or imagine, and we believe this is only the beginning,” said Gruenewald. “As we look ahead, we’re excited about the new ways God is using technology to help people make even more connections between the Bible and their daily lives.”

YouVersion will soon launch Bible Lens, a new app that analyzes the objects in a photo and detects biblical themes to suggest the Bible verse that best fits the photo. Then, it automatically designs a high-quality Verse Image that can be shared with friends. Additionally, the app will have the ability to create Verse Images from photos saved in a person’s camera roll to help them rediscover every moment of their life through the lens of the Bible.

Visit blog.youversion.com to stay updated on YouVersion and its products.

YouVersion was created by Life.Church to help people engage with the Bible. The team designs and builds experiences that make it easy for people to integrate the Bible into their everyday lives. Since 2008, the Bible App has offered a free Bible experience on smartphones, tablets, and computers that allows people to read the Bible at any time and in any place. In 2013, YouVersion launched the Bible App for Kids, in partnership with OneHope, to engage children with beautifully illustrated, interactive Bible adventures. For more information about YouVersion, visit www.youversion.com.