It is often said that half of great video is great audio. It is certainly true that bad audio can kill good video. But it’s not always easy to get great audio into your camera every single time. While it can be tricky, the dividends will pay off when the audio is high quality and is synced perfectly to the video. Whether you’re producing a delayed livestream, captured video church service for YouTube, or some other video church production, spending time on the quality of the audio is important.

Why would you need separate audio? If your camera doesn’t have a high quality audio input (XLR inputs), you may want to consider recording audio separately. But what if you want to record more than two separate tracks of audio, like if you have four people on camera? Even higher end cameras only have two microphone inputs. You can mix their signals into one (or two), but then you lose the ability to adjust individual levels in post. In this case, it would be great to record audio separate from the camera and add it into your video when you edit.

Additionally, you may need to roam around a room but you want to get audio from the band on stage. In this scenario, you may want to record the output from the sound board to get a nice mix of the band and add it to the video in post. There are plenty of scenarios you may encounter that require separate audio recording. So, how do you accomplish separate audio recording without sacrificing quality?

Fortunately, recording and syncing separate audio for video is easier than it has ever been. To get great results, you must prepare before you shoot. First, you will need a good quality audio recorder. It could be a computer, a multi-track recorder in your sound booth or a recorder designed for video production (see some recommendations at the end).

Second, make sure you can record a scratch track on the camera. Ideally, you will keep your camera microphone on or send a mixdown feed to your camera in addition to recording your tracks on a separate recorder. You’ll see why this is important in a moment.

Finally, make sure you have a reference in order to sync the sound. Some recorders allow you to sync timecode on both the camera and recorder, but this is often only available on high end equipment. The best way is to use a clapper or something similar. You’ve probably seen these, they are the sticks clapped together before a scene in a movie. The reason for this is to create a distinct visual and audio cue that will tell you where to line up the clap sound on the audio track with the visual of the sticks coming together on the video track. If you get this right, the rest of your track will sync perfectly. But you don’t need a fancy clap board, you can just use your hands. Have someone on camera clap into the microphone while you are filming them…done. In the event that you are not able to sync at the beginning, try syncing at the end of your recording. If you can’t sync at all, there is still hope. Read on.

Once you get your video and audio in your editing software, its time to sync. Remember I told you its a good idea to record a scratch track on your camera even if you are doing a separate recording? Now is where that will help you immensely. By listening to the recorded track and the scratch track together, you can sync your audio by ear. You can adjust your audio track to the left or right on your editing timeline to get it to match the scratch track. Once you are close, mute your scratch track and do the rest by eye, making sure the mouths, drum hits and other percussive visuals sync up perfectly.

But you don’t have to do everything manually. PluralEyes is an app that lets you input your video and audio. It will analyze the audio information on your scratch track and the separate recording and sync them. Adobe Premiere has syncing ability built into the application. Read about how to synchronize clips in Premiere here.

Check out these production recorders for capturing separate audio, especially if you are conducting interviews or capturing any audio with a DSLR camera: 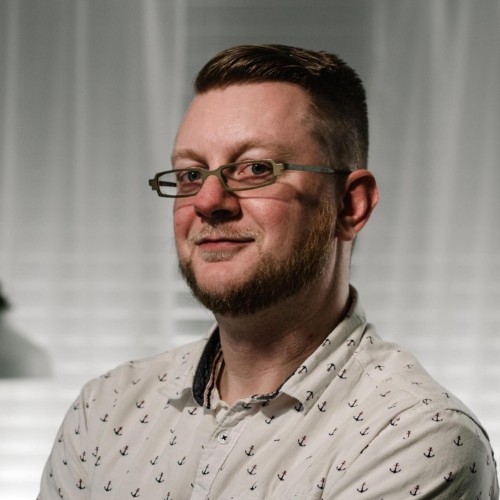 Matthew Fridghttp://www.churchvideocoach.com
Matthew is an Emmy®-nominated filmmaker and founder of Church Video Coach. He has produced work for NFL, Discovery Channel, Fox, GNC, Velocity Network, Freethink Media, Martin Guitar and more. His passion is to tell compelling stories with a cinematic approach. Having served as an Associate Pastor and Worship Leader for nearly 10 years, he also desires to see churches use video to effectively communicate the Gospel in new and creative ways. His work as a blog writer, podcast guest and public speaker has been seen at [twelve:thirty] media, worshipideas.com, Churchm.ag, ChurchLeaders.com, ThomRainer.com, rad-ideas.com, ChurchFilms.com and the National Worship Leaders Conference. He lives near Pittsburgh, PA and in his spare time loves writing scripts, doing projects around the house and hanging with his wife and four kids.