Worship software has been around since the end of the last century, but with many churches still using PowerPoint, Keynote, or other business-centric presentation software, you may think, “What’s the big deal?  Why shouldn’t we stick with what works?”  ProPresenter 6 answers with features that should stop people from asking that question and make business leaders ask, “Why should I stick with PowerPoint when there’s ProPresenter?”

As far as the basics go, ProPresenter can do everything you’d expect any presentation software to do.  Need to display text? No problem.  Want to put the text over a still or video?  No worries.  Want to have an outline and/or a drop shadow around the text for legibility?  It can do that as well.

Unlike business presentation software, ProPresenter allows you to add groups of slides (like songs, scripture, and sermon notes) on the fly.  If you’ve created it before, it’s available in the Library for use whether the Spirit leads a different direction, the worship leader just forgets what’s planned, or for whatever reason.

Since early on, ProPresenter has been built on the idea that content should be created in layers. There’s a layer dedicated to masks, one for persistent graphics, one for text and other slide elements, one for video, one for live video, and a final layer for a solid color.  Each layer can be affected separately from others, making a lot of great things possible.

ProPresenter has been able to do most of this since at least version 3, but that just scratches the surface of its capabilities.

Do you need to do things with video that really would require you to play multiple videos at once or sometimes show lyrics on video and sometimes not, on multiple screens.  You can integrate Pro6 with ProVideo Player, seamlessly and easily.  This is possible, not only because Renewed Vision makes ProPresenter interoperable with other software and hardware, but they also make PVP2, so it just works.

Need to import slides quickly to create sermon notes? No problem.  Just copy and paste from the pastor’s manuscript or import a text document and Pro6 creates them quickly and easily.

ProPresenter 6 also has the ability to add virtually any bible translation to the bible interface and then display scripture from those translations either on the fly, add it to the library, add it as an element by itself, or add it to the sermon notes or into a song.

With a subscription to CCLI’s Song Select service (available from CCLI, themselves), you can get lyrics quickly and easily and have them added to your library or directly to the current presentation.

If you need to format slides for certain services (like one for your student ministry) differently from how you format them for your regular service, the Templates feature allows you to change the formatting with just a couple of clicks so that it’s the same every time.

ProPresenter 6 also makes it easy to display numbers from your children’s ministry without having to type them in.  Using Messages, which now has a built-in web server, volunteers or staff in the children’s ministry can go to a site that’s only visible on your church’s internal network and type in the number.  This pops up a notification in Pro6 that lets the person running ProPresenter show it with a single click.

The children’s ministry isn’t the only one to get help from Pro6, though.  With a powerful confidence monitor feature, called the “Stage Display,” musicians can see the current lyrics and lyrics from the next slide before the congregation does.  Pastors can see exactly what slides look like on the main screen without turning around to look behind them.  Changing between layouts is done easily with a cue that switches based on the part of the service ProPresenter is displaying.

In addition to improved stage display capabilities, ProPresenter 6 adds features long requested by lovers of the software.  These features include “element transitions” that make it easy to create dynamic announcement slides, better integration with Planning Center Online, the ability to schedule elements to start precisely at a certain time, and the ability for the pastor to annotate slides live with the Telestrator, either directly from the control screen of ProPresenter or through an in-app purchase in the ProRemote App. 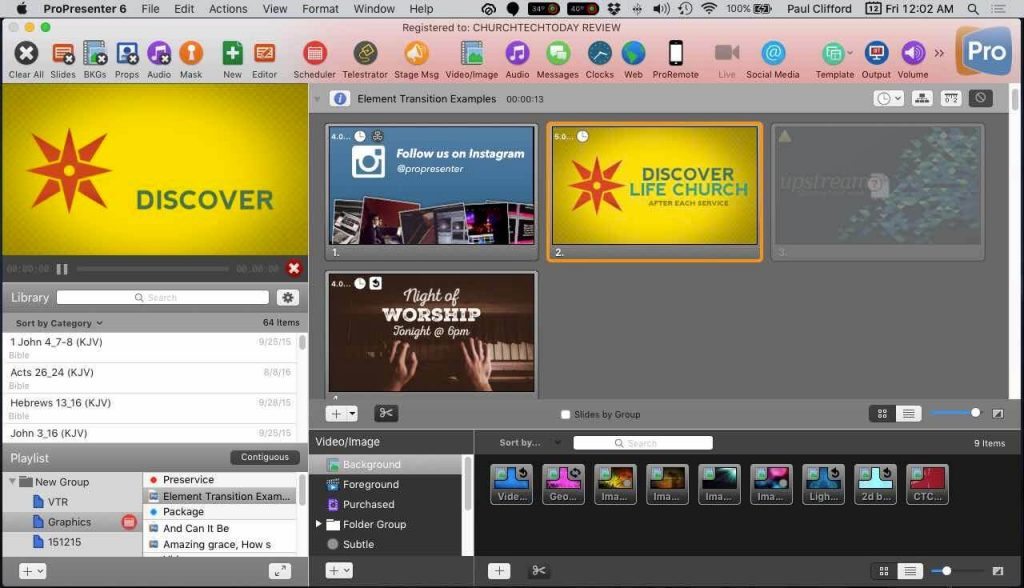 ProPresenter 6’s abilities are easily expanded with two apps: the remote app, and the stage display app (which has a new version with updated features specifically for Pro6, called Stage2).  With the remote app, you have wifi control of ProPresenter, so the pastor can control the presentation or annotate slides with Telestrator (with an additional in-app purchase).  An additional feature allows members of the production team to observe what’s going on, but not control it, with the same app, but a different login and password.

Something else that’s new with Pro6 is that these apps are now cross platform, supporting both iOS and Android.

ProPresenter 6, likewise, is itself cross platform compatible with versions created for both Windows and Mac.  In general, this makes Windows equal to Mac in its ability to run ProPresenter, but there are some exceptions.

Whether it’s because ProPresenter was originally written for the Mac or because MacOS has additional capabilities, some features aren’t available on the Windows platform, at least not yet.  The biggest of these is the ability to control ProPresenter with Midi or to control third party devices like switchers and lighting consoles with the Communications module (or Midi module if you only need that capability). The optional modules, which are sold separately, also allow you to split a single output into three discretely controlled video signals with the addition of a Matrox TripleHead2Go, interface with professional equipment with SDI (or NDI), output with Alpha channel (using the BMD Decklink or UltraStudio interfaces), edge blending, and/or control of “slave” ProPresenter machines with the master control module.

It doesn’t stop there, though.  While you can sync content locally between machines for free with ProPresenter’s sync feature, for churches with multiple campuses or churches with staff and volunteers who prefer to create their presentations from home, Renewed Vision offers a subscription solution, called ProCloud, designed to make the process of syncing content easily.

With all this power, you might expect ProPresenter 6 to be hard to use.  It’s not.  Children who are too young to read can use it to advance slides (as long as they understand when to do so) and volunteers who are new to ProPresenter can pick up the basics in a few minutes.

This isn’t to say that it’s easy to master, though.  With so many features, while advancing slides and building basic presentations are both easy, there’s always more to learn to take your presentations to the next level.

While Renewed Vision provides a manual, an online community, and video tutorials, if you want to learn how to make ProPresenter do what no one else can, you’ll have to spend time mastering the lesser-used features and experiment with what it can and can’t do.  Thankfully, since ProPresenter is one of the most widely used pieces of worship software, there are unofficial communities, like the ProPresenter Users’ Group on Facebook  and a simple search of YouTube will uncover hundreds of tutorials from church techies just like you who just want to help others.

That’s not to say that ProPresenter 6 is perfect.  It’s not.  While it was released in May of 2015, there are still a few bugs that Renewed Vision is squashing.  It’s not that it’s prone to crashing or anything like that.  You just find that a few features don’t always perform as you’d expect.  The updates come out regularly and often address problems that some users have noticed, but don’t always come without a cost.  This is complex software with thousands of lines of code, so getting it perfect does take time.

With that said, thousands of churches use ProPresenter the world over. It’s great software written initially by a coder who was displaying lyrics at his own church and wanted something better.  That experience shows in this version, as it did in the versions before it.

Some churches may baulk at the $399 ($799 for a site license) price tag with bible translations, modules, and apps costing extra, but they haven’t known the pain of dealing with inadequate software that was either designed for organizations with different needs or designed by people who don’t fully understand the needs of churches, and especially the solitary individual, who hides in the back or in a separate room altogether, tapping the space bar repeatedly so the words to songs and the Word of God, can be both seen and heard.

ProPresenter 6 continues the long tradition from Renewed Vision of creating powerful software that makes it easy to say, “Yes” to your church’s vision for creating compelling presentations with audio, video, and text.