Could Live Streaming Kill the Church? 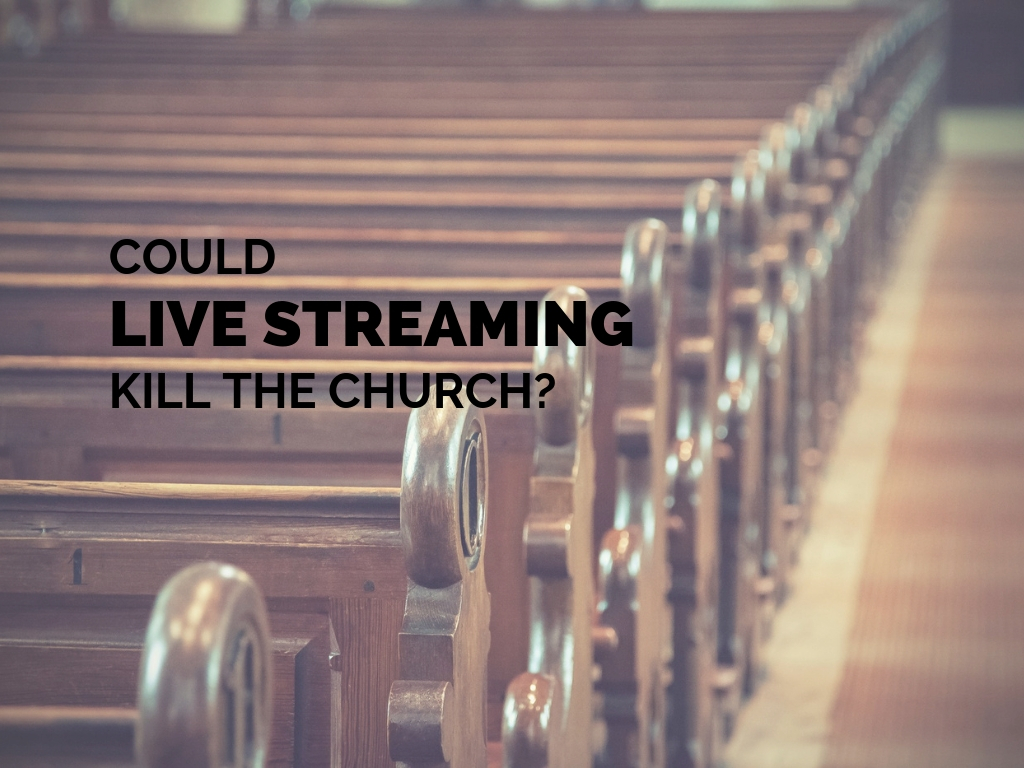 You might read blog posts that insist live streaming is going to kill the local church. To paraphrase Mark Twain, the death of the local church has been greatly exaggerated. In addressing upcoming church trends, Carey Nieuwhof mentions that after his church started a live stream they ended up with more online attendees than in-person attendees. Live streaming didn’t kill the church, but it did make them pause to consider how best to reach those online attendees.

You see, there was a time when there was a box located in nearly every home. This box displayed video, either from a paid service, usually delivered over coax, or free via RF signals broadcasted from major cities. People would sit around these boxes and watch serialized fiction and non-fiction programming. Before they existed, there were other electronic devices that sent similar content, via RF signals that played audio only. Before that, there were printed communications distributed on paper. They were either daily, periodically, or even produced more irregularly, although the last of these tended to be much thicker, with either hard cardboard covers or thinner, paper-like ones.

They were called television, radio, newspapers, magazines, and books, respectively. But, we’ve got the internet now, so none of them exist anymore.

What’s that? They do? But, we’ve got live streaming and on-demand video! You can read blogs or listen to podcasts. So, the old media should be all extinct, right? Wrong.

That’s not really how it works. Sure, eight tracks and mini-discs have mostly gone the way of the dodo, but more entrenched things are much harder to kill and they often morph into other things and find a footing elsewhere.

It’s actually simple. Radio didn’t kill print because it was linear and expensive to produce. Television didn’t kill radio because music and talk were ideally suited to consume in places where you couldn’t use your eyes, like while driving in a car or doing other things.

The live stream won’t kill the local church because it’s just not the same as being there, just as television didn’t kill sporting events and movies haven’t killed live plays and shows.

Sure, there are places where some churches are vulnerable, but not all churches and not vulnerable to all problems.

It IS more convenient to stay home and watch online, but convenience isn’t always the deciding factor. If it were, movie theaters wouldn’t exist. They cost more AND make you show up on their schedule, after all.

Perhaps there’s something to the thought that nationally known teachers do a better job preaching than local pastors, but that’s not universally the case.  Also, Craig Groeschel and Andy Stanley aren’t going to visit you in the hospital when you have a sick child. They don’t shake your hand every Sunday morning in your home town. If people only followed nationally known speakers in any area, there wouldn’t be smaller events with people you’ve never heard of before…but there are.

Why Does Live Streaming Matter?

Do you go to businesses without websites? Gen-Xers and Millennials don’t. Churches are the same way. Without a live stream, more and more, people will wonder if your church is a “fly by night” operation or is trying to hide some radical belief.

So, will a live stream kill your church? Probably not. Will it change it? Maybe.

Is an inefficient operation that has a building for one hour a week of public meetings ripe for disruption? Yep. Innovative ways to do church or use facilities for other purposes during the week, not refusing to use new communications methods, will help.

No matter what happens, you shouldn’t play defense and cower behind the rusted shield of “that’s the way we’ve always done it.” Instead, be the church that attacks hell, whose gates can’t stand against the attack. Innovation and creative thinking are the way you prevent anything from killing the local church. God is doing a new thing. Follow Him in doing it.