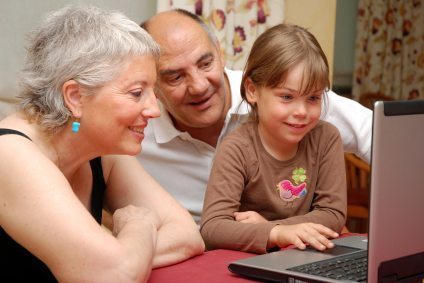 In a Barna Group study released today, the research firm reports on how technology affects family communication and relationships. As always, Barna provides great data to review and consider when applying technology tools to the ministry space. We need to be watching how America communicates so that churches can incorporate practices that will reach their intended goal.

The research was conducted in partnership with Orange, which is part of the reThink Group. The innovative study included nationwide interviews among parents and 11- to 17-year-olds from the same households, allowing comparisons between the parents and the tweens and teenagers who reside in the same home. The full study is available a new digital report, The Family & Technology Report.

The following highlights from the study included the following five findings from Barna’s report summary:

1. Parents are just as dependent on technology as are teens and tweens.
Most people assume that teenagers are driving the technology gap in families. Yet the research points out that the gap is much smaller than most imagine. In reality, parents are using technology and media to nearly the same degree as their 11- to 17-year-olds.

* Parents are more likely than their tween and teen offspring to report regular use of cell phones and desktop computers. They are just likely as their teens and tweens to use laptop computers and tablet-like devices.
* Parents watch just as much television and movies, use the Internet for as many minutes per day, and spend more time on the telephone and emailing than do their tween- and teen-aged children.
* The technology and media-related tasks that young people do more often than their parents are listening to music, texting, and playing video games. Even in these categories, most parents are surprisingly active.

Like other national studies have shown, parents are spending nearly the same amount of time per day as their tween and teen-aged kids consuming media and using various digital technologies. The gap was even smaller among families with parents who are still in their thirties or early forties. In other words, younger parents are even more technology- and media-dependent than older parents. All of this points to the fact that the digital world has influenced all members of the family, not just teens.

2. Most family members, even parents, feel that technology has been a positive influence on their families.
While many assume that families are fed up with technology, by nearly a two-to-one ratio parents think of technology like computers, cell phones and video game systems as making their family life better rather than worse (32% to 18%). Most describe the influence as neutral (51%). Interestingly, parents are actually even more favorable toward entertainment like music, movies and television than toward technology, saying its influence is more positive than negative by a five-to-one ratio (38% versus 7%). A slim majority of parents feel entertainment is neither good nor bad (55%).

As relatively unconcerned as parents are about technology and media, the students in their home are even more positive about these elements of modern life. Tweens and teens are substantially more likely to describe technology’s influence as positive rather than negative (47% to 6%); similar ratings hold true for young people’s view toward entertainment (56% to 2%).

The conclusion is that most families welcome technology and media with open arms, rather than with suspicion. One of the reasons for this may be that many families use technology, including television, movies and video games, as a shared experience.

3. Very few adults or youth take substantial breaks from technology.
Americans’ dependence on—what some might call addiction to—digital technology is apparent in the study’s findings. One out of three parents and nearly half of 11- to 17-year-olds say there are not any specific times when they “make the choice to disconnect from or turn off technology so they can have a break from it.” And those who take such breaks tend to be driven by convenience rather than intentionality. For example, only 10% of parents and 6% of teenagers say they try to take off one day a week from their digital usage.

This reliance translates into some interesting behaviors and habits. Nearly half of both parents and teens said they emailed, texted or talked on the phone while eating in the last week. Two out of five youth and one-third of parents have used two or more screens simultaneously during this time period. And half of students and one-fifth of parents have checked email or text messages in bed in the last seven days. The question arises whether families are in control of their technology or being controlled by it.

4. Families experience conflict about technology, but not in predictable ways.
First, parents and their children experience conflict about technology, but not frequently. Only about one in every four parents said they had “strong disagreements about the limits on media and technology” on a weekly basis. About the same proportion says that “technology causes tension between me and my parents / kids.” Still, half of parents (49%) worry about technology and media wasting their children’s time, among other things. For their part, one-fifth of youth (21%) say their parents have a “double standard when it comes to technology.” And one-sixth of these tweens and teens (17%) say their parents “bring their work home with them too much,” a habit certainly abetted by pervasive technology.

Second, parents and youth are most disappointed by technology because it is “so expensive to get the latest,” not because of the unwanted content or the isolation it can bring. In fact, only 39% of parents and 27% of tweens and teens say they get frustrated by technology because it “makes it hard to have conversations.” The conclusion stemming from the research is that technology seems to amplify the relational patterns and problems already in place: families that have healthy and frequent conversations find technology aiding that process, while families without such healthy interactions find that technology exacerbates the isolation of its members.

5. Few families have experienced—or expect—churches to address technology.
Most parents and tweens/teens have not heard any kind of teaching in a church, religious setting, or public forum (like a school) about how families can best use media, entertainment or technology. In other words, most families are not getting any coaching or assistance when it comes to integrating technology into their family life. When asked if they would be open to one version of such training—“a Christian or faith-based perspective about how to be a good user of entertainment and technology without letting things negatively impact your family relationships”—about two-fifths of parents (42%) and one-third of tweens and teens (33%) expressed interest. The implication is that faith communities could take a leadership role in teaching about the proper use of technology in healthy families.

Commentary on the Findings
David Kinnaman, president of Barna Group, expressed the need for the Christian community to expand its concept of stewardship. “Perhaps technology should be added to discussions about stewardship. Technology is as old as craftman’s tools. But today’s digital and emerging technologies are in a different class than hundreds of other hobbies or interests because they have come to significantly define the use of time, the development of talent, and the allocation of money.

“Technology is shaping family interactions in unprecedented ways, but we seem to lack a strategic commitment to the stewardship of technology. The Christian community needs a better, more holistic understanding of how to manage existing and coming technological advances. Parents, tweens and teens need more coaching and input in order to face the countless choices they make regarding how technology affects their attention, interests, talents and resources.”