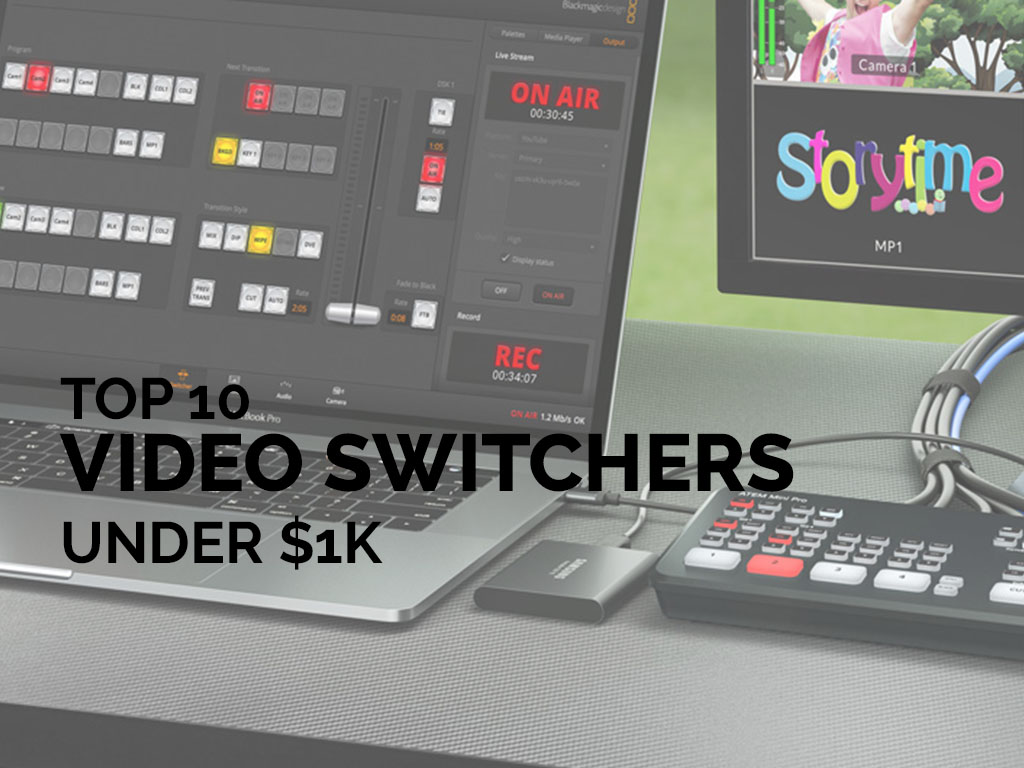 While it’s possible to live-stream with a single camera and a software encoder, or even with multiple smartphones, using a video switcher is the way many churches should do it.

First, what’s a video switcher? A video switcher is NOT a selector switch that you’d pick up from a big online or electronics retailer. While it does the same thing, select video sources, it does so without the visual glitch on the screen that a selector produces.

It’s also not a presentation switcher/scaler, like those made by Kramer and other manufacturers. They have their place, but don’t enable you to add effects like keys (where you overlay graphics, or another video signal, on top of live video) or make it easy to preview the next shot, choosing between different transitions (like cuts or dissolves).

While most of these options require an external monitor to preview video sources, this list does not include any that require an additional computer. In many cases, you can use a computer or tablet for additional control options and accessing other features, as well.

Finally, these choices are all HD (high definition–at least 720p) resolution, so if your church is still using SD (standard definition) video sources, you’ll need to upgrade those. Here are the Top 10 Video Switchers, in price order, under $1,000.

This offering from BMD has a lot to offer in a small package, at a small price. While it’s exciting to see something on this list for less than $300, there are a couple of things to look out for, like the lack of a multiview. On the bright side, if you’re looking for something that shows up as a webcam for encoding software, but has the options of a live switcher, this might be the choice for you. [This product isn’t currently available. It’s possible that BMD is discontinuing this product in favor of their newer offering, #3 on this list.]

Technically, this isn’t a switcher like most of the rest of the options on this list. It’s a capture device. But with the optional Teranex smart panel which connects to the front, you can switch between the SDI and HDMI connections that the Web Presenter has.

It’s a little pricy for a capture device, but the basic switching it provides might be just what some churches need. If you have a single camera and the output of your worship software, maybe you just want to go between the two.

The Mini Pro costs basically 2x what the Mini costs, but provides a lot more value. While it still only has one HDMI output, that output can be preview, program, OR multiview. By connecting it to ethernet, you can live-stream directly without either an external software or hardware encoder. It can record directly to a hard drive or thumb drive as well. Like the mini, it can also connect to a computer and shows up as a webcam.

The V02-HD, like the BMD web presenter, is limited to two sources. But that’s where the similarities end. First, it has four HDMI jacks: one for each of the two sources as well as a dedicated preview and program out.

What makes it really powerful is that it can do video effects like keying too. So, if your church wants to live-stream a single camera and key a lower-third over the video, you can do so very easily. While it doesn’t have a traditional preview/program control surface or a multiview, since there are only two sources, and it has a dedicated preview output, you will always be able to see what’s next before you take it live.

The VS0601 has a lot going for it. It’s got a mix of HDMI and SDI inputs which means you can connect sources like computers via HDMI that are close to the unit, but connect cameras from farther away. It has a dedicated multiview output, an aux, and a traditional control surface.

A lot of the features in this switcher are normally reserved for pricier units.

The Upstream Pro isn’t like any of the other switchers on this list. At first, it looks like a 4-source switcher, but looks can be deceiving. It’s actually a 3-source switcher and encoder. The two rows of buttons on the control surface are actually 8 presets called “scenes.”

For more advanced work, you really need to connect an iPad to it and use the app from IOGEAR to compose shots with keys and set up your live-stream.

The StreamLive seems to be just another name for the IOGEAR Upstream Pro. Some of the plastic is a different color, but otherwise, it looks identical.

Don’t confuse “ATEN” with “ATEM”, which is the name for BlackMagic Design’s switcher line.

The ez-Pro has a traditional preview/program control metaphor. It has a mixture of HDMI and SDI sources and does Luma and Chroma keying.

The V-1HD looks at first like a 4 input video switcher that follows the traditional preview/program metaphor, but that’s one of its drawbacks. In fact, while it looks like a traditional switcher, it operates on an A/B switching metaphor where the active bus switches places. In practice, that means that sometimes the bottom row of buttons is sent to the program and sometimes the top row is. You can’t know which one without looking at the unit.

Other than that, it is a very powerful switcher.

It only has 4 inputs, and they’re all HDMI, but that’s fine for many churches.

Another benefit is that it does have luminance and chroma keying, so it’s very possible to add lower thirds to your live-stream.

The Television Studio HD is one of the more expensive switchers on the list. It supports the most sources and is the most powerful.

It’s missing some of the features of other ATEM switcher mentioned in this list, like live-streaming directly from the unit and scalers on each input. Part of this is because it’s the oldest of the units by BMD under $1,000.

It has some curious design choices, like the fact that it’s obviously made to be rack-mounted. But it’s only 2/3rds as wide as an equipment rack and needs to be mounted on a shelf. Perhaps that’s because BlackMagic sells two pieces of equipment that are 1/3rd a rack space wide that can mount next to it. Additionally, the controls all fit on the front of the unit, instead of the top, so it doesn’t have room for both a preview and program bus or a T-bar.

It has an aux, a dedicated multiview out, program out, and the ability to not only do luma and chromakeys, but also a linear key (alpha channel). It can also spread across one upstream and two downstream keys. Additionally, it can take 8 sources–4 HDMI and 4 SDI.

There are a lot of choices for under $1,000, so do your homework and find the one that’s right for your church and your situation.

[Editor’s Note: Amazon and other retailers listed here often change their pricing, which is out of our control.]

For information about live streaming software, check out these resources: