Enter a giveaway for a free paid license to ProPresenter 7

ProPresenter is the industry standard for church presentation software. If a church uses something other than PowerPoint, it's most likely ProPresenter. That's not to say that it's perfect. As with most things, there is always room for improvement. Nowhere is that more obvious than in the implementation of ProPresenter 6 for Windows. The recent update to ProPresenter 6 answers many of the issues from former versions, plus it adds features you didn't know you needed.

ProPresenter 4 was the first time that Renewed Vision offered a Windows version. With each major release, the feature-set has gotten more robust, to the point that ProPresenter 6 is now very capable on Windows. It's not as capable as the Mac version, but capable, nonetheless.

ProPresenter 7 changes all of that.

Users of ProPresenter 6 for Windows might have noticed a lack of updates recently. That's not because Renewed Vision has abandoned the Windows version, but because they've been hard at work making version 7 as good on Windows as it is on Mac.

Here is a quick list of updates available in ProPresenter 7:

Now, we'll dive into 11 of the most significant changes updates available in ProPresenter 7. Here's a video review:

#1 – Compatibility on Both Mac & Windows

Previously, the Windows version of ProPresenter was only 32-bit. Now it joins the Mac version in the happy promised land of 64-bit apps. Before, there were certain text formatting options that the Windows version just couldn't do, but the Mac version could. Now, both versions have powerful text editors onboard. Before, most of the modules worked, but the Midi module didn't work on the Windows Version. Now, you can send and receive midi notes from both versions, whether you're controlling other software or ProPresenter is being controlled by it.

#2 Modules are a Thing of the Past

While both platforms now have complete parity with regard to functionality, it wouldn't be correct to say that all the modules are supported in both versions. Modules are a thing of the past, meaning that all functions are included with ProPresenter 7 for no additional fee.

This is great news for churches who always wanted to try sending alpha channel information to a video switcher. No more worries if you can't quite justify $1000 per computer running ProPresenter for the Alpha Keyer Module.

Maybe your church always wanted to try edge blending or a triple-wide-screen using the Multiscreen module for a special event, now you can. Try all the features that were formerly in modules or none of them, either way, the choice is yours, not the finance committee or treasurers. 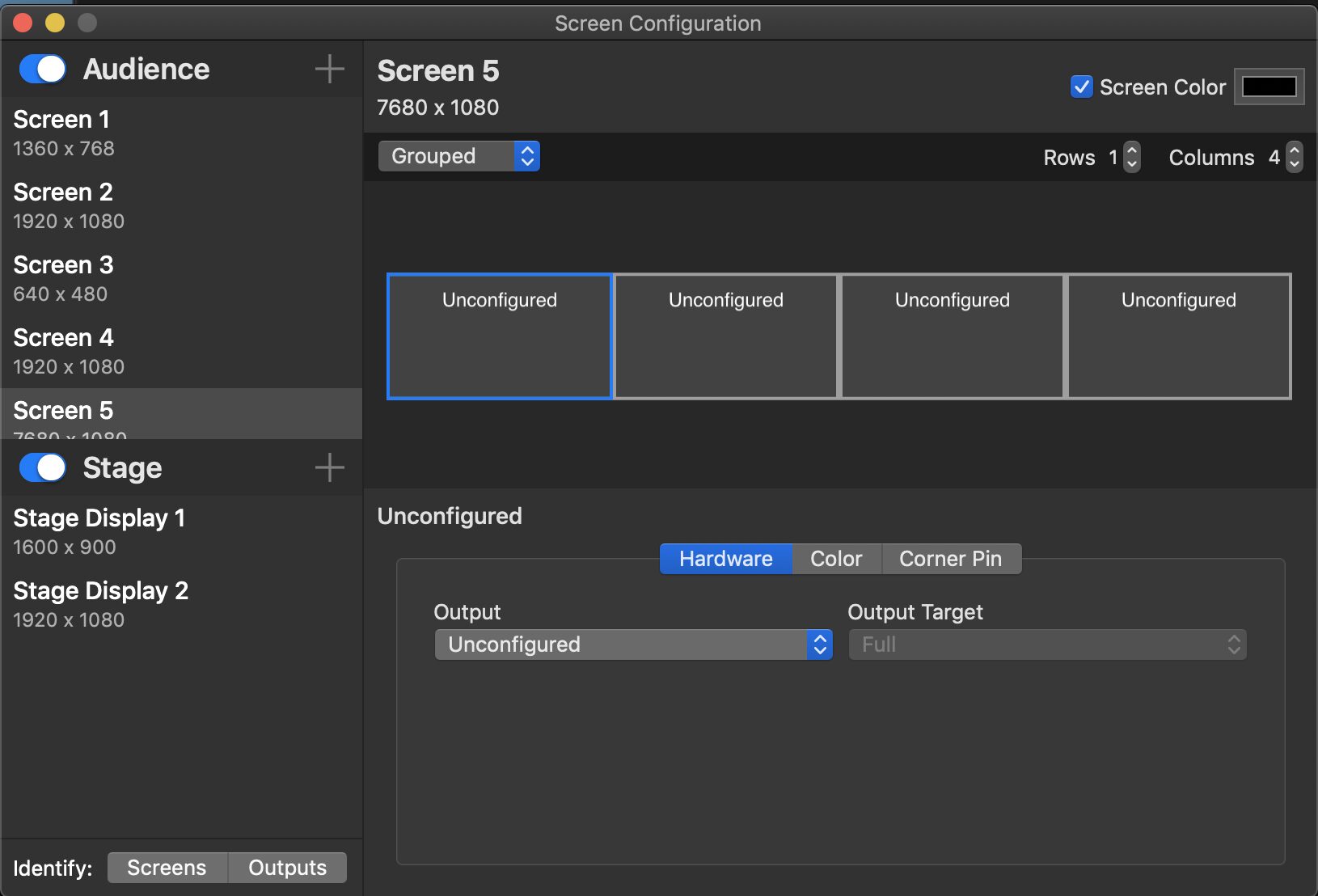 A handy feature for churches that have a slide loop playing constantly in the lobby is the ability to create a loop within ProPresenter and have it run continuously on a separate video output (or one of the outputs of a Matrox TH2Go, DH2Go, DataPath x4 or similar).

That, in and of itself, is brand new. In ProPresenter 6 (and earlier versions), split outputs (like from the Matrox and Datapath units) had to be used for edge blending or multi-screen modules. Now, with Pro7, you can use any output as a dedicated screen for stage display and still use the other screens for multiscreen or edge blending.

Each display can be a separate resolution, too. So, if you have a center screen that 1600×600 and two side screens that are 1080p, you can do that with a single computer running Pro7.

This feature, along with the slide loop function, make a single computer able to operate like multiple computers.

#5 – Multiple Versions of the Bible are Supported

Now, for the first time, ProPresenter also supports multiple versions of the Bible at the same time.

Maybe your Pastor wants to compare KJV with NLT. No problem.

Maybe your church is bilingual. You can have English and Spanish translations up at the same time, too.

#6 – Option for CheckerBoard Background for Media With Transparency

In Pro5, if you had video with transparency you'd often see it rendered as having a white background.

In Pro6, it's more subtle, often showing as a snapshot of what the first slide, or the slide ALSO containing the background, will look like.

Now in Pro7, if media has transparency, the background can be set to show a checkerboard background. It's like you might see in a video editor or motion graphics program, although that's optional.

That's not the only improvement to the UI. In the last couple of years, Apple has slowly rolled out dark mode to its operating systems. For techs sitting in the back of a darkened sanctuary, this was a welcome change, but ProPresenter didn't support it.

Now, the whole UI for ProPresenter 7 has been darkened. The glaring white glow of the ProPresenter control screen no longer illuminates your face in a dark room. The interface has been reorganized with a left-to-right layout. The left-most column is your library and playlists, while the middle is where you'll interact with your slides and media. The right-most column shows a preview of what is on screen for the congregation to see, as well as controls for that screen, the stage display(s), other outputs, and control of audio-only content. 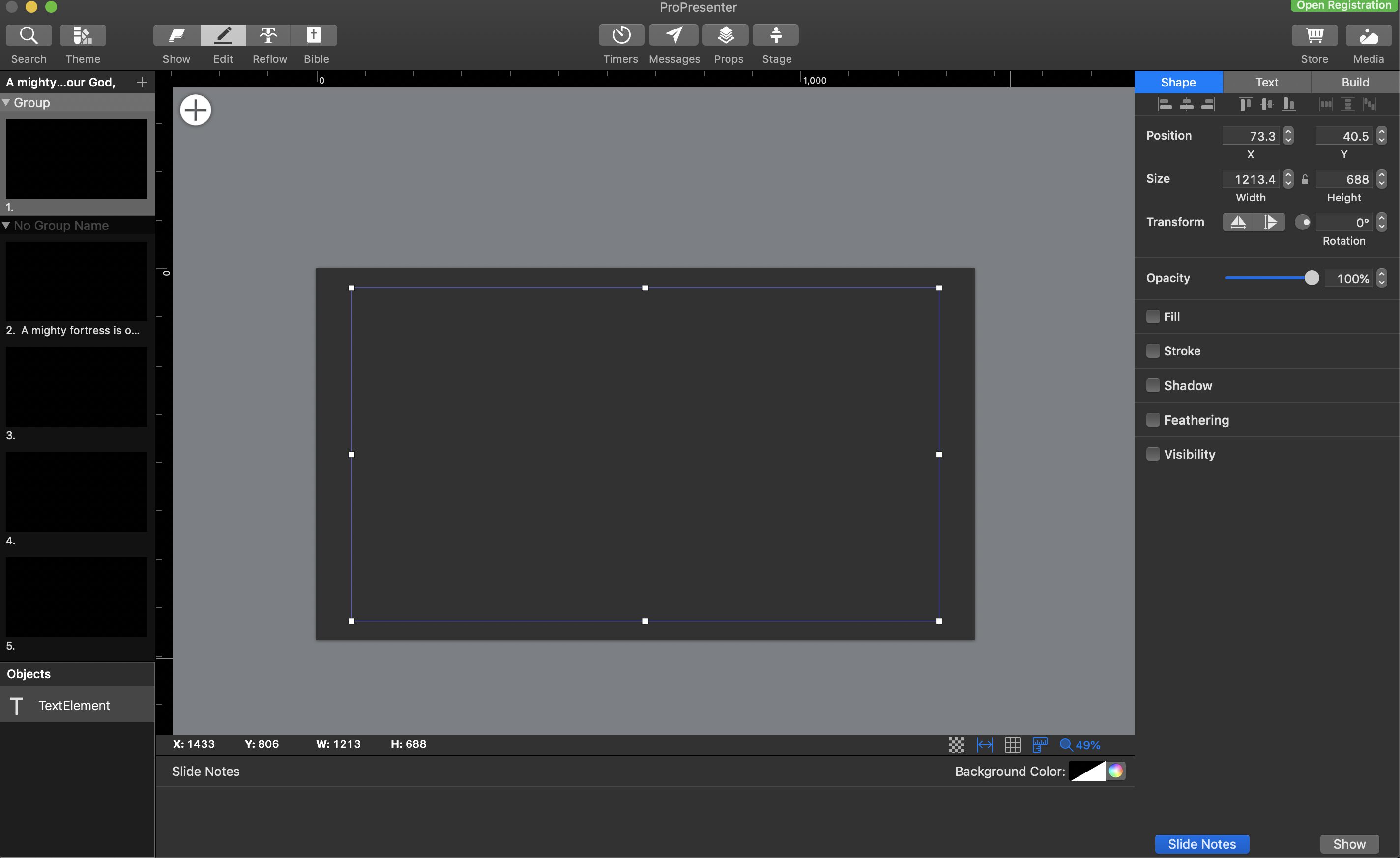 Even the toolbar follows this three-column convention, like the new layout. The icons immediately above the center section allow you to switch between the four primary ways of interacting with ProPresenter: Show, Edit, Reflow, and Bible.

Speaking of the toolbar, even the “clear” buttons are repositioned. Want to clear the props layer? There's a button right by the preview window that will be highlighted when a Prop is active. Want to clear the background? It's highlighted when a background is running so you know that clicking the button will clear it. This is really valuable when a video is playing and you don't know what layer it's playing from. You may assume that the person who created the presentation put it on the media layer, but they, instead, put it on the slides layer. Having the highlighted buttons make it clear which is which.

The Editor has also been reorganized and augmented, making more trips into Photoshop unnecessary. Click directly into the Editor to bring the Notes section to the forefront and additional editing tools. (Thank you to Pro 6 for the Bezier Curve!) No need to right-click on a slide and then choose edit any longer. When you're done with edit or reflow, just click on Show and you're back ready to continue controlling the screens.

#10 – Updates to the Unregistered Version

For people who are building presentations on unregistered copies, you no longer have to click the button to try ProPresenter when you first start it up. Perhaps you are working at home or maybe your church only has one license, which is devoted to the computer located in the sanctuary.

It's also worth noting that the ProPresenter logo doesn't stay on the output permanently with the unregistered version – it fades in and out. This does two things. First, it makes it more obvious if someone tries to present with an unlicensed copy. Second, it temporarily shows you what the output will look like on the licensed version, which may be located in another room or another part of the city from where you're working.

While earlier versions of ProPresenter had the ability to toggle between a thumbnail and list view of slides, ProPresenter 7 adds a third option. This option brings the text to the forefront, at the expense of how it actually looks on screen. This can help techs with aging eyes.

ProPresenter 7 unlocks a lot of the power that ProPresenter 6 had reserved for larger churches. It also adds refinements that will make creation and presentation easier than before.

If you've been dragging your feet waiting to upgrade from ProPresenter 5 or earlier, there's no better time to upgrade. Make sure your computer can run it and then start the process your church requires to buy the upgrade. If you've been using ProPresenter 6 for a while, this update will unlock power you didn't know you needed. If you just upgraded recently, start saving now because you'll want this as soon as you can get it…it's that good.

For More Resources Related to ProPresenter, Check out These Articles:

Pros and Cons of Running ProPresenter With Volunteers

10 ProPresenter Hacks to Take Worship to the Next Level

What makes people choose one church over another? What really matters to people when they are deciding together, as a family, what church they will attend? I’m sure you have thought about this. Well, Pew Research Center actually asked people these exact questions and we are letting you in on the latest information.
Partner Content

Did you know that 17 million Americans don’t even attend in-person worship services and visit church websites instead? When community members look for a new...
Digital Ministry

We don’t know what 2023 holds any better than we knew what to expect in 2020. But in the middle of what is sure to be challenging economic times, there are a few best practices that will help us weather whatever comes our way