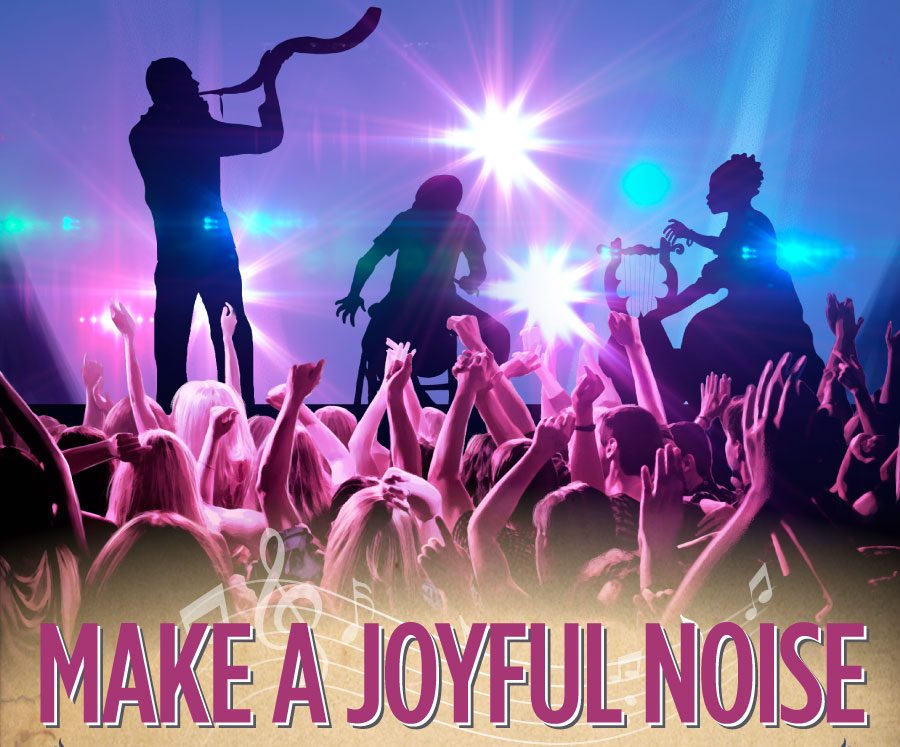 Whether accompanied by organ, handbells or electric guitar, or not accompanied by an instrument at all, Christians have used songs and music to worship God throughout history. Let’s take a look at musical instruments in the Bible, the history of music and worship and how different denominations of Christianity use music today.

History of Music and Worship in the Christian Church

From Gregorian chants to electric guitar and everywhere in between, worship services have incorporated music throughout the ages.

Pliny the Younger writes a letter to the emperor Trajan stating that early Christians “were accustomed to meet on a fixed day before dawn and sing responsively a hymn to Christ as to a god,” one of the earliest non-Biblical accounts of Christians using song to worship Christ. (2)

Ephesians 5:19 (NIV): “Speak to one another with psalms, hymns and spiritual songs. Sing and make music in your heart to the Lord.” (3)

Clement of Alexandria writes, “Leave the pipe to the shepherd, the flute to the men who are in fear of gods and intent on their idol worshiping. Such musical instruments must be excluded from our wingless feasts.” Instruments are associated with pagans during this time, and the use of music in Christian worship is frowned upon. (4)

Known as the “Father of Christian Hymnody,” Ambrose of Milan introduces rhymed, metrical hymns that become the basis of the hymns we know today, contrasting with earlier unmetered, prose-like psalms and prayers. These hymns are a cappella, sung without accompaniment. (5)

Pope Gregory I collects and codifies what is now known as “plainchant,” or Gregorian chant, a choral vocalization of verses sung with one unaccompanied melody line. The Roman Catholic Church uses Gregorian chant to this day in liturgical music. (6-8)

Music becomes widely notated for the first time, allowing plainchant to become more complex: Choirs can now easily reproduce a melody that would be difficult to share using only the oral tradition. (9)

French composer Pérotin introduces polyphonic music to the church – music that uses multiple parts to harmonize with the melody. (8)

Organ music catches on in the Roman Catholic West, though the Orthodox East eschews the accompaniment. (9)

During the Reformation, Martin Luther gives music a central place in the Lutheran Church, encouraging the entire congregation to sing along at certain times to polyphonic chorales. John Calvin favors congregational psalm-singing to monophonic tunes, forming the Calvinist liturgical tradition. Meanwhile, the Roman Catholic Church continues to use instrumental and organ music performed by musicians and not the congregation. (9)

Fed up with the “dull indifference” of traditional hymns, Isaac Watts writes about 600 hymns during his lifetime, paraphrasing Scripture in a way that pleases many but upsets others, who find his work sacrilegious and refer to his songs as “Watts’ whims.” (9)

William Booth, founder of the Salvation Army, uses religious lyrics set to secular music performed by lively brass bands to attract people to the church. His practical approach to liturgical music is best summed up with the quote, “Why should the devil have all the best tunes?” (10-11)

2 Chronicles 5:13 (NIV): “Accompanied by trumpets, cymbals and other instruments, they raised their voices in praise to the LORD and sang: ‘He is good; his love endures forever.’” (3)

Following the Emancipation Proclamation in 1863, the spirituals evolve into an ecstatic form of singing born in California Pentecostal churches, creating the foundation for gospel music as we know it today. Composers such as the Rev. Thomas A. Dorsey pioneer the genre. (12-13)

Larry Norman, considered the “Father of Christian Rock,” popularizes setting religious lyrics to rock ‘n’ roll. One of his most beloved songs, “Why Should the Devil Have All the Good Music?,” references William Booth’s famous quote. (9)

Christian denominations still frequently disagree on the role of music in worship, though there has been a movement to understand other traditions rather than simply condemning them. (9)

Colossians 3:16 (NIV): “Let the word of Christ dwell in you richly as you teach and admonish one another with all wisdom, and as you sing psalms, hymns and spiritual songs with gratitude in your hearts to God.” (3)

Facebook
Twitter
Linkedin
ReddIt
Email
Previous article3 Reasons Leaders Need to be Prepared for Ministry Crises
Next articleAudio vs. Video Podcasting: What Your Church Should Use and Why

The gospel is the underlying secret to a healthy spiritual church. But this doesn’t mean that churches should ignore the resources God has provided to amplify the gospel message. Today, we have the privilege of having access to numerous tech tools that are specifically designed to help ministries thrive.
Digital Ministry

Join Kenny Jahng on the Church Communications podcast as he sits down with Erick Goss, CEO and Co-Founder of Minno.Minno is a Nashville-based media and...
Online Giving

Your church’s donations platform should never stand in the way of someone giving cheerfully. Here are 5 options that will elevate your donors’ giving experience.

Worship, in all forms, requires focusing on God an

Bible software can be a great resource for Bible s

When it comes to church live streaming, data can t