Audio vs. Video Podcasting: What Your Church Should Use and Why 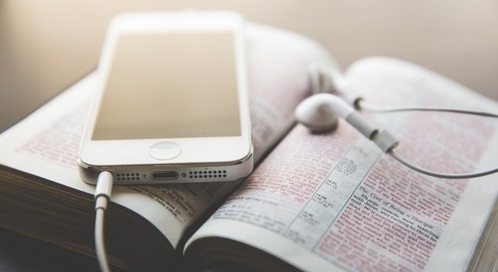 Ten years ago, I had discovered podcasting.  It gave me an excuse to drag out the Rio mp3 player that I got when I bought my iBook a few of years earlier.  I didn’t have money for the fancy new “iPod” that Apple sold, but I found I could make do with this eight megabyte wonder.

Like the creation of broadcasting 100 years previous, podcasting started with audio-only content.  It wasn’t long before video was added to the roster of possible formats.

Back then, video was more difficult to deal with than it is today.  You could only watch it on your computer, for the most part.

Despite its success, we knew that Apple would never release a video iPod because Steve Jobs had just said, “I’m not convinced people want to watch movies on a tiny little screen.”

Now, every smart phone out there can play video.  Now, tablets are common.  Now, you can connect a Roku, Chromecast, AppleTV, or FireTV to your television to get 1080p video on your television.

So, which should your church do — audio or video?  Clearly, the time for video has arrived, right?

Video is easier to consume than ever before.  Our internet speeds are finally getting fast enough to handle it.  In fact, services like Netflix and Hulu are already enabling video to be delivered online.

So, is your church behind the times if you only do audio?

Maybe, but there are some clear advantages to audio-only delivery.

No.  In all those situations, you can listen to audio, though.

Other than times that you are sitting at home, looking for entertainment, when can you watch video?  In line at the store?  You could, but you don’t have 30 minutes for even a short sermon.  While waiting at the doctor’s office?  Maybe, but don’t you normally check email or FaceBook during those times?

Video really is what we call a “lean back experience.”  You normally don’t just turn on a video podcast to “have something on in the background.”

Despite the fact that I consume a lot of podcasts, not many of them are video podcasts.  When I have some time to watch video, I tend to watch streaming media on YouTube, Vimeo, etc.

Podcasting is powerful, though.  You can consume a podcast when a streaming service just wouldn’t be practical, assuming you downloaded the media ahead of time.

People can stream audio podcasts with Stitcher, but because mobile data is so much more expensive than your home connection, why not download stuff you’ll be consuming “on the go” ahead of time?  If you prefer video and are a passenger or think you’ll be out of range for internet, you might want to download it ahead of time.

There’s less competition in the world of video podcasts, too.  So you might think it’s a market ready to be dominated.  Maybe, but maybe not.

Sure, there’s less competition, but there are reasons why.  This is partially due to the fact that they’re harder to make and distribute, but also because (as we’ve seen), the audience is smaller.  Don’t forget that while the distribution of an audio podcast with a media host like Libsyn.com can be as inexpensive as $5 a month for unlimited downloads of a weekly show, video would cost a lot more.

So, should your church do audio or video podcasts?  Yes and maybe.

Audio is the standard and most consumable format.  Video is a growth area.

What you shouldn’t do is a video-only podcast unless your content is so visual that it doesn’t work in audio-only format.

While most of my shows are both audio and video (with the audio-only versions being much more popular), my screencast show, which primarily shows how to use ProPresenter, is video only.  This is because it’s easier to watch someone use software than to listen to them describing it.

This is where many churches are missing out.  Because audio is so much easier to consume, stripping the audio from the video and releasing it as a stand-alone podcast will likely increase the people who consume it.

Doing the opposite will likely cause you to lose subscribers because the people who only listen when their eyes are occupied will quit downloading it if you only distribute videos.