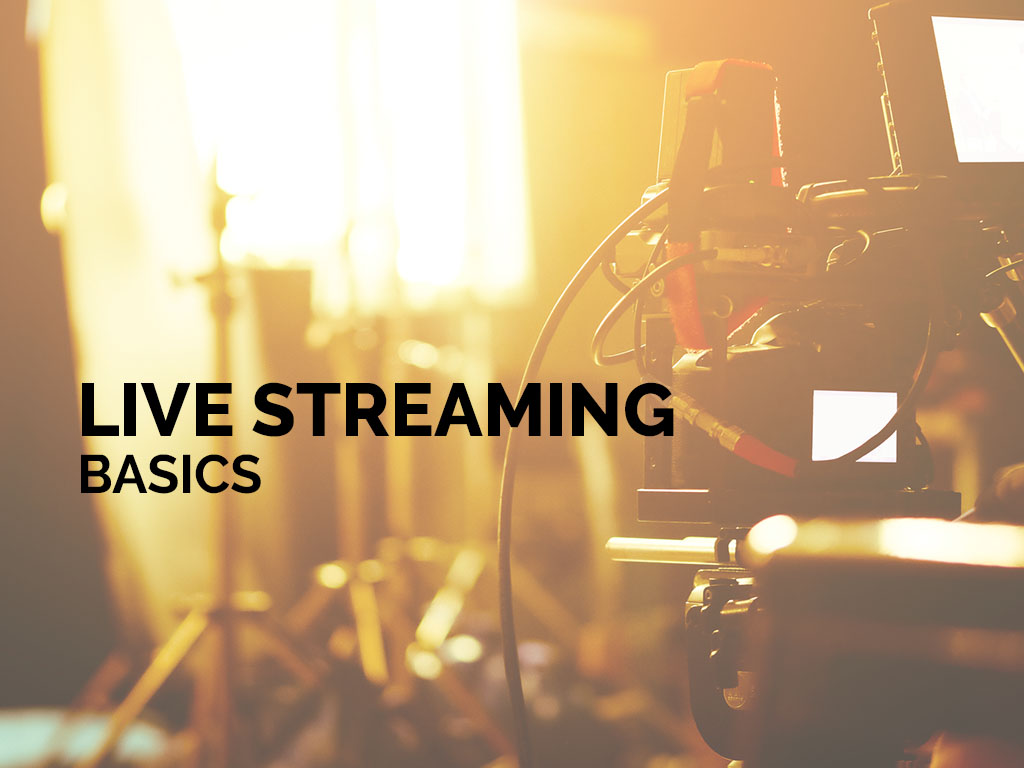 Live streaming is one of those areas where it’s easy to become overwhelmed with where to begin. In this article, I’ve provided live streaming basics to help you begin. While it’s not an exhaustive list of every possible live streaming configuration, it is a great starting point.

There are five main elements that you should consider when you want to stream:

Obviously, how a live stream sounds, is an important factor to consider. To begin, it’s best to not use the computer’s built-in microphone. It doesn’t matter if you think you get decent results, a modest investment will yield exponentially better results than trying to get by.

For most churches, you’ll want to create a sub-mix from your audio console which includes the main mix AND an ambient mic. The reason is simple. People online can only hear what is mic’ed. So, unless you are mic’ing louder instruments (like drums), they’ll be much quieter than instruments that need amplification already, like guitars.

Ideally, you’d have someone in an acoustically isolated space remixing the audio so that it sounds just like the live audio does but through the online congregation’s speakers. For most churches, having the sound engineer periodically checking the live-stream mix with noise-isolating (not canceling) headphones will suffice.

If you’re encoding with a computer (more about that later), you might want to use something like a Focusrite Scarlett 2i2 to capture that audio from the audio console into the computer.

For lighting, you’ll want to light FOR the camera. This means using lights that illuminate the subject’s face AND separate him/her from the background. The backlighting is especially important if people in front of your church wear clothing that causes them to blend in with the background (like dark suits or robes in front of a background that’s either not lit or dark-colored). After bad sound, lighting that makes it look like the subject is just a floating head or that doesn’t light his/her face correctly, is the second-most distracting mistakes you can see from churches online.

If you have overhead lights that point straight down, you could have a problem where the shadow of the subject’s forehead darkens his or her eyes making him or her look like a raccoon. Good lighting is one of the most overlooked aspects of video production in the church world, so set yourself apart by doing the best you can with it.

Unless you have dedicated circuits and additional on-stage cooling, consider looking into LED lights for a stage. They’re more expensive to buy, but the energy savings, and not having to change lamps will pay for that difference. Also, your pastor and others on the platform will thank you for not making the podium the hottest place in the whole building.

For cameras, make sure you can get your signal (and do so without overlays, like camera settings) into your encoder (whether software or dedicated hardware) or it’s useless.

It might be tempting to use a webcam but remember that they are designed for subjects that are close to the computer. If you go with a cheap webcam that does everything automatically, the slightest move by the subject could make the lighting change enough that the camera will attempt to compensate by quickly making the shot suddenly and noticeably brighter or darker.

There are apps that can give you manual control, in this situation or webcams that are better at dealing with them, but most of the time, it’s better to use a smartphone or camcorder.

In the past, SD cameras might have been a good option, but today, other than on Facebook (which limits most streams to 720p), 1080p, is where you should start.

If you have a camcorder, you might assume that you can just connect its USB connection to your computer, but for most cameras, that’s not the case. Some DSLRs can do it, but they’re the exception.

For capturing the video into a computer, if you’re using a software encoder, you’ll need a capture device, like the Blackmagic Mini Recorder (or newer Thunderbolt 3 Ultrastudio recorder). Other options include ones from Magewell and Elgato. Avoid capture devices that don’t capture either HDMI or SDI, along with ones that are too cheap. You want to buy this device once and have a reliable capture card.

Some cameras, like those from PTZoptics, have another option: NDI. NDI, short for Network Digital Interface, is a protocol that sends video over a hardwired gigabit computer network.

Some encoding software, like Wirecast, OBS, and even ProPresenter 7 can take that video and send it on to your live-streaming host for distribution on the internet.

When it comes to encoding (preparing the video for sending over the internet), you really have two options: software and hardware.

Software runs on a computer so it depends on the speed of that computer to do a good job. Hardware is purpose-built and doesn’t require a computer or a capture device to send video to your live-streaming host.

Since it’s so easy to live-stream with a smartphone or tablet, it can seem like you don’t need all the pieces of the puzzle that we’ve discussed, but that’s because these devices work off a video camera, capture card, and encoder by themselves.

They’re also more limited in that superimposing lyrics from your worship software or switching to another camera require special apps like Switcher Studio.

No matter whether you’re just using a smartphone or a purpose-built system run by professionals, you’ll need fast internet to live-stream. It’s worth mentioning that most ISPs advertise is the DOWNload speed. For live-streaming, you need fast Upload speed.

While not perfect, you should be able to get a good idea of what you have by visiting sites like speedtest.net or speedof.me. For 720p, you’ll need at least 1,500 kbps, but it’s a best practice to err on the high side and include a little extra for network overhead or dips in speed.  Of course, if you’re live-streaming in 1080p, you

Keep in mind, too, that if you have open wifi at church, a teen coming in and live-streaming clips of service from his/her phone could take quite a bite out of what you have available.

It is better to have way too much than not enough.

What most people don’t know is that you don’t stream to each person watching your service individually. You use a streaming provider to handle the distribution. There are free options like YouTube and Facebook or paid services like ChurchStreaming.tv, Vimeo, WorshipChannels.com, StreamingChurch.tv, Sermoncast.com, Boxcast, Resi, and others.

As with anything, paid services tend to offer advantages in workflow and flexibility that free ones don’t. Unless you can’t afford any bill at all, don’t automatically ignore the paid services.

Scheduling, embedding, video podcasting, and a Roku app, as well as, the peace of mind that you’re paying someone to attend to your problems, are all reasons to use a paid service instead of just the free ones like YouTube and Facebook. Most of these services will also send your live-stream to social media as well, so you can get the reach of social media with the added features of a paid service.

Other Things to Consider

Finally, if you don’t have written permission for all the songs you use, you’ll need a license like the Worshipcast license to stream legally. That may not even prevent YouTube or Facebook from issuing copyright notices because of fears that you’re doing so without permission, so there are other incidentals.

What questions do you have about live streaming? What would you add?

Below is a list of articles we’ve published in the past on this topic: