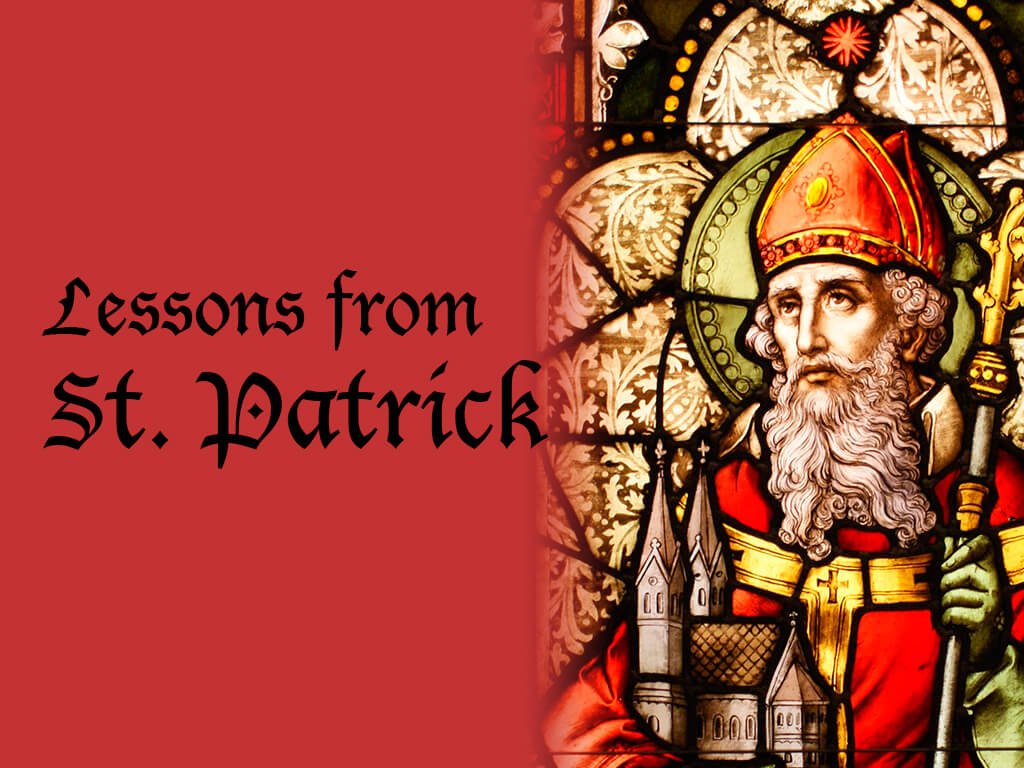 For a holiday that is known for leprechauns, wearing green, and drinking to excess, I like to take time out to pause and celebrate this patron saint of Ireland, who has an incredible testimony, and whose Breastplate moves me deeply. St. Patrick overcame huge obstacles and trauma in his life to listen to God’s call and act–bringing the Christian faith to a whole nation and building a heritage that long outlasted his personal efforts.

Lesson #1 – Overcome Your Past With Confidence

When Patrick was about 16 years old in the fourth century A.D., according to the Confessio of Patrick, he was taken captive by Irish pirates from his home in Britain and enslaved in Ireland. He lived there six years as a shepherd before escaping and returning to his family. He then became a cleric and was drawn back to Ireland to preach, minister, and teach the Irish people about God and the Gospel of Jesus Christ. Patrick could have remained embittered about his captivity and the incredible toll it took on him. Instead, he overcame the difficulties of his captivity and focused in on listening to God’s call on his life. Because he was an overcomer, intently listening to God’s direction, he had an incredible impact on the cause of Christ throughout Ireland and the world.

Lesson #2 – Be Obedient Even When it Seems Outlandish

Patrick apparently had a vision that he would return to Ireland. He spent lots of time in prayer, and following this vision, he began making plans to return to Ireland. Once there, he began preaching the Gospel to mostly pagan people where he received death threats and wasn’t, well, shall we say, popular. Despite this, he was certain of the call God had placed on his life. First, he waited on God. Then, he was obedient. There’s much to say about doing God’s will. Most of us struggle with finding clarity; some of us have clarity, yet struggle to be obedient. Either way, we can take away from St. Patrick’s life that sometimes God is clear and the directive is anything but safe.

Lesson #3 – Don’t Be Afraid to Get Dirty

The odds were stacked against St. Patrick. Druid, cultish, idol-worshiping pagan culture prevailed during this time in Ireland. Superstition, witchcraft, devaluation of women, and tyrant warlords ruled the land. Yet Patrick was not deterred by the fear of oppression or harm, he travailed on to serve the Lord. In our Western ideology, we highly value comfort and safety. Patrick had already lived through extreme discomfort and lack of safety during his enslavement thus he was undaunted by the challenges that lay before him through his mission in Ireland. We could learn much from his resolve not to give up, and not to fear.

And now, if it’s been some time since you’ve read St. Patrick’s Breastplate, I share it with you now. May God richly bless you as you read it:

I bind unto myself today
The strong Name of the Trinity,
By invocation of the same,
The Three in One and One in Three.

I bind this day to me forever.
By power of faith, Christ’s incarnation;
His baptism in the Jordan river;
His death on Cross for my salvation;
His bursting from the spicèd tomb;
His riding up the heavenly way;
His coming at the day of doom;*
I bind unto myself today.

I bind unto myself the power
Of the great love of the cherubim;
The sweet ‘well done’ in judgment hour,
The service of the seraphim,
Confessors’ faith, Apostles’ word,
The Patriarchs’ prayers, the Prophets’ scrolls,
All good deeds done unto the Lord,
And purity of virgin souls.

I bind unto myself today
The virtues of the starlit heaven,
The glorious sun’s life-giving ray,
The whiteness of the moon at even,
The flashing of the lightning free,
The whirling wind’s tempestuous shocks,
The stable earth, the deep salt sea,
Around the old eternal rocks.

I bind unto myself today
The power of God to hold and lead,
His eye to watch, His might to stay,
His ear to hearken to my need.
The wisdom of my God to teach,
His hand to guide, His shield to ward,
The word of God to give me speech,
His heavenly host to be my guard.

Against the demon snares of sin,
The vice that gives temptation force,
The natural lusts that war within,
The hostile men that mar my course;
Or few or many, far or nigh,
In every place and in all hours,
Against their fierce hostility,
I bind to me these holy powers.

I bind unto myself the Name,
The strong Name of the Trinity;
By invocation of the same.
The Three in One, and One in Three,
Of Whom all nature hath creation,
Eternal Father, Spirit, Word:
Praise to the Lord of my salvation,
Salvation is of Christ the Lord.

Here are a few additional articles I found helpful in researching this article: