5 Things The Bible Says About Paying Pastors or Church Leaders 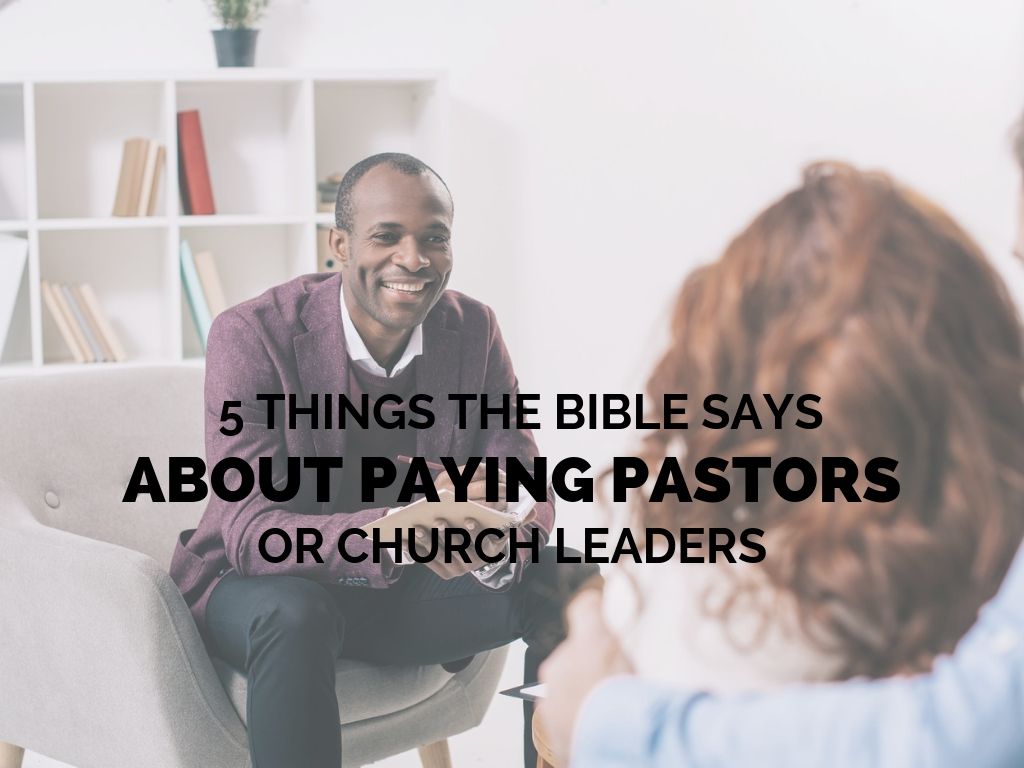 The pastor's salary is frequently a source of contention. What does the Bible say about paying pastors? How much should a leader make?

On the one hand, people argue that they are to be servants and thus can serve within the church as pastor while working elsewhere. For instance, the Apostle Paul had a tent-making job, and many claim that modern pastors must do the same. It's a question that's been debated countless times. Thankfully, the Bible clears up any confusion on the subject.

5 Things The Bible Says About Paying Pastors or Church Leaders

For you yourselves know how you ought to imitate us, because we were not idle when we were with you, nor did we eat anyone's bread without paying for it, but with toil and labor we worked night and day, that we might not be a burden to any of you. It was not because we do not have that right, but to give you in ourselves an example to imitate. For even when we were with you, we would give you this command: If anyone is not willing to work, let him not eat.

For anyone who contends the Apostle Paul did not expect pastors to be paid by the church, please read these verses in Thessalonians.

Paul did have a tent-making job, presumably when working within the city of Corinth and Thessalonica. However, it is clear that it wasn't the ideal situation. These verses readily claim that Paul had it very rough, simply because he did not want to burden the church with any of his own needs. Sure, pastors can have a servant-like attitude like him, but the congregation can also have a generous spirit. They should expect a portion of their tithe to go towards the pastor's salary.

Some say pastors should be tent makers because of Paul's example. Yet, this was a hardship for him because he didn't want to burden the church. Churches should be careful to be generous and not make money their master. Click To Tweet

For it is written in the Law of Moses, “You shall not muzzle an ox when it treads out the grain.” Is it for oxen that God is concerned? Does he not certainly speak for our sake? It was written for our sake, because the plowman should plow in hope and the thresher thresh in hope of sharing in the crop. 11 If we have sown spiritual things among you, is it too much if we reap material things from you? If others share this rightful claim on you, do not we even more?

Nevertheless, we have not made use of this right, but we endure anything rather than put an obstacle in the way of the gospel of Christ. Do you not know that those who are employed in the temple service get their food from the temple, and those who serve at the altar share in the sacrificial offerings? In the same way, the Lord commanded that those who proclaim the gospel should get their living by the gospel.

Once again, Paul makes a strong case for pastors getting paid by the church. Taking a passage from the Old Testament, he makes the argument that pastors should be able to make a living off of the spiritual work that they do. No sane farmer would muzzle his ox while he treaded grain, so why would anyone do that to a pastor? Paying him a fair wage for the amount of work he puts in frees him up to focus on the Word of God and on ministering to the congregation.

And remain in the same house, eating and drinking what they provide, for the laborer deserves his wages. Do not go from house to house.

Put simply, any worker deserves compensation for his work. If the pastor is putting in hours at the church office, counseling, visiting the congregation, mentoring others, and studying for weekly messages (sometimes numerous ones throughout the week), I think it’s a fair expectation that he gets paid. After all, the worker (pastor) is worthy of his wages.

If you've never realized how much the pastor really works, start tallying up all the times you see him at church. As one who has worked inside of a church for a handful of years, I've seen firsthand how many hours the pastors and church leaders work. They are often in the office five to six times a week and make different weekly meetings during evening ministries. Also, they attend all or most of the church services, and then even find time to go to hospital visits and personal ministry calls. It’s a lot — they deserve to be paid fairly.

Even in Thessalonica you sent me help for my needs once and again. Not that I seek the gift, but I seek the fruit that increases to your credit. I have received full payment, and more. I am well supplied, having received from Epaphroditus the gifts you sent, a fragrant offering, a sacrifice acceptable and pleasing to God. And my God will supply every need of yours according to his riches in glory in Christ Jesus.

Wouldn't you rather be like the church described here? Specifically, one that makes your pastor or church leader overflowing with praise because of the compensation with which you paid him? It is far better to give than to receive, and yet congregants often receive from the pastor but never give back. Something is wrong with that picture.

Need fresh sermon illustrations? 5 Funny Sermon Illustrations You Can Use This Week

And the twelve summoned the full number of the disciples and said, “It is not right that we should give up preaching the word of God to serve tables.”

Although this verse is not expressly about paying pastors, it does have an implication towards that. If you want your pastor to be freed up to do pastoral ministry, he has to get paid, plain and simple. How can you expect a pastor to truly focus on pastoral ministry with all his energy and efforts if he has to pick up a second or third job just to pay the bills?

A pastor should get paid by the church with a fair wage. He should never determine his own payment but have outside board members determine a fair payment. This amount is commensurate with the amount of work he is doing and the congregation size.

It’s understandable that people have become wary regarding pastors getting paid. So many of the televangelists and large churches have fallen into the public eye with expensive houses, cars, and jewelry. It seems out of place, and probably rightfully so. However, it does not follow that a church should just cease paying pastors. The fact is, if they need people to do pastoral work—then pay for pastoral ministers!

It really is true; you get what you pay for. If you don’t pay your pastors, chances are they get sidetracked with other work in order to pay the bills. Remember, a worker is worthy of his wages.

We hope these resources are helpful to you!

Looking for data on church giving? Be sure to check out 10 Stats About How Churches Are Faring Regarding Giving.