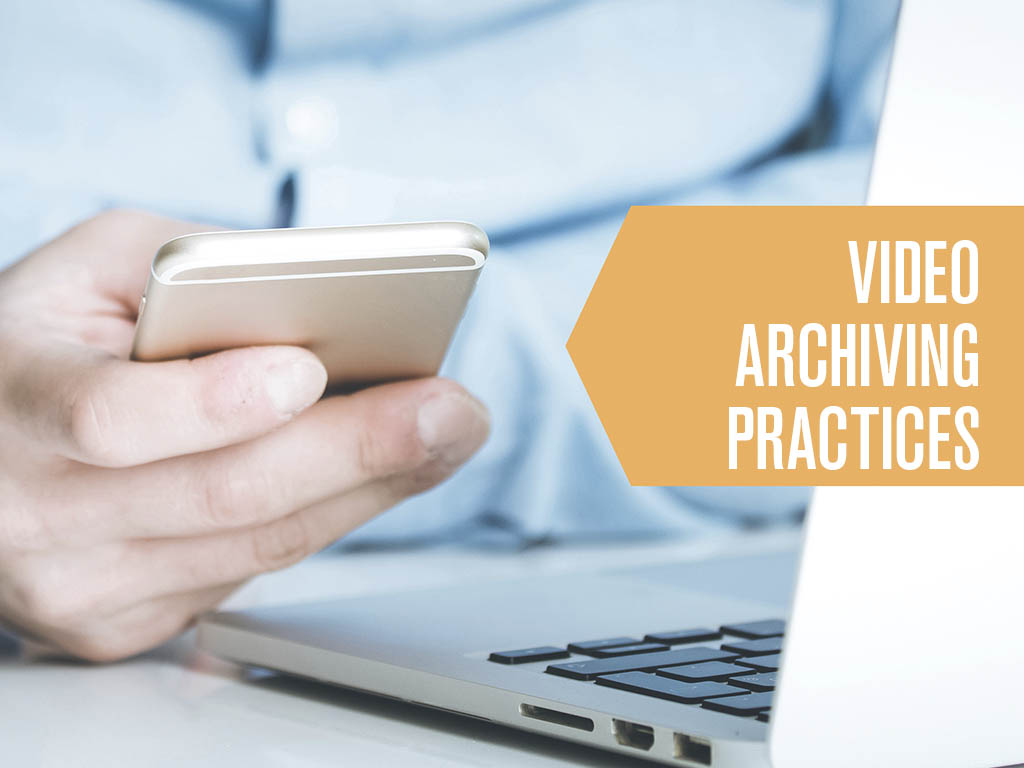 How many types of media does your church store? Just in my office alone, I have eight types, not counting hard drives and a solid state drive (SSD) or two.

VHS, S-VHS, 8MM, DVD, Mini-DV, DVC-Pro, Zip disk, and SD cards. I might even have a VHS-C tape around here somewhere, if I looked hard enough.  You might have more. Maybe it’s BetaCam, 3/4”, or even various film stock.

So, what’s the harm in having historic video, in a closet, or on a shelf somewhere? Nothing, if you NEVER use it and don’t care if it slowly degrades.

If, however, you’re EVER going to use even a frame of that video, you need a way to catalog and access it.

What happens when your pastor says, “Our fifteenth anniversary is coming up. Let’s pull some old footage and show a montage of our history?” Is that a five-hour project where you just pull a bit from each year and cut something together, or is it a five-week project where you have to track down the tapes and get them transferred somehow before you even start editing?

Maybe it’s not even something that you can anticipate. What if a key volunteer dies unexpectedly and her family wants video of her in her role at church? Could you find that at a moment's notice?

In the past, history slipped away because we couldn’t chronicle it. Now, we’ve got the opposite problem. We have too much to get our minds around. Most people carry HD cameras with them everywhere they go–in their phones. It’s not a matter of being able to capture the present to save it for the future; it’s a matter of getting access to it when you need it.

Disorganization isn’t the only thing to fear when it comes to historic video. A leaky sprinkler head, the sun coming through the window, someone deciding to move old speakers into proximity with electromagnetic tape formats, etc. can all harm or permanently destroy your only copies.

So, what do you do to make sure that important moments in your church’s history don’t become lost or destroyed like early seasons of Doctor Who were and the Apollo moon landing video nearly was?

Having a pile of it “somewhere” isn’t good enough. You need to know what media types you have and what years it represents.

#2 – Create a database of what you have.

This can be as simple as a spreadsheet with titles and content, but make a list of what you have.

If you know you have 8MM film of the ground-breaking of your church’s current building, that’s fine, but if you don’t have a way to watch it, that’s not all that useful. You want a copy of everything in digital form.

Store the originals in a place where it’s likely they’ll be as protected from the elements as possible. Maybe it’s a safety deposit box or an underground storage facility. Choose a place that you’re intentionally protecting your media, instead of just hoping something doesn’t go wrong. Ideally, this location will be separate from the church location.  That way, if something happens in one location, you’ve still got another copy in another.

You want your media stored in multiple locations, in multiple formats, so that nothing lost or destroyed would cause a loss of that video.

Now, that you’ve got your video in digital form, you need a way to archive and retrieve it. You could do the same thing with the hard drives that you did with the tapes, discs, and film, just throw them on a shelf somewhere and hope for the best.

I wouldn’t do that, though.  Hard drives, like tapes and discs, degrade over time as well.  So, here you have a few options:

Put the video on a NAS or server that’s accessible on your network.

As long as you’ve got a database of what you’ve got, finding the footage you need is as simple as searching and copying over what you need.

The downside of doing this is that first, you still need a good backup strategy to make sure your server doesn’t crash, losing data, and second, you’re not really dealing with a system that’s designed for media archiving.

Another option is to store your media online. Whether it’s Vimeo, Wistia, YouTube, or Amazon S3, there are places you can upload your video so that it’s not only local, but also in the cloud.

One word of warning with this, though. There are two things that can go awry when you store stuff online. The company could go out of business/pivot and your data could get lost in the shuffle. (Ask users of Justin.tv what happened when they pivoted to concentrate on Twitch, if you don’t believe it could happen.)

The other thing is that you could violate their terms of service, or they could have a change of heart on what they want to allow, and your account could get suspended. Well-meaning people have had their accounts closed or hacked and lost access to their media forever, It doesn’t matter for this discussion whether they why it happened. What matters is that accounts were inaccessible; there wasn't a good way to get the media back.

If you’ve got the money, the professional solution is a Digital Asset Management solution (DAM).  This is what news stations use to be able to pull up “file footage” when a story breaks at 4:00 and they need to show an interview with someone from the past in time for the 6:00 news.

This isn’t the cheapest solution and you’d still want off-site storage as a back-up (which some solutions provide as part of their cost), but knowing that you can pull up video at a moment’s notice for a funeral, church anniversary, or just research about what you did for Easter five years ago or Christmas seven years ago, might make it worth the investment.

Every day that goes by you could be losing footage from the past that you might need in the future. Do you have a plan to keep that from happening?